In short, they claim that the Indirect Taxation Authority, by an act passed on March 30, ordered an additional inspection for each Dutch vehicle, for which they must pay a high deposit in advance, although 99 inspected vehicles have the correct documentation. Then they have to wait for the deposit, often for a long time, and they do not know when the imported vehicle will be sold. Opinions are that everything done is designed to profit companies that sell new vehicles.

“New vehicles are excluded from this decision and we suspect that it is a party-linked lobby that sells new cars,” they said at our request in one of the import houses, and more of them gathered in the fight against this act of the ITA. They state that they revolted and wrote to the European Commission, as it is a violation of positive regulations and agreements.

So far, they say, the import of vehicles from the Netherlands has been going normally.

“You import a car, you pay VAT and that’s it. Now we no longer know what to do. I have to give 3,000 KM for a check, and I don’t know when I will sell the vehicle, and when that money will be returned to me. There are people from RS who have not been refunded since 2017, and the vehicle that was checked was in order. Secondly, we pay the customs deposit only on used vehicles, and they excluded new ones, which is absurd”, the importers continue to tell us. They demand equality, and they see this kind of action as a blockade of the import of used vehicles.

“We import quality vehicles, from 3-5 years of age, not everyone can afford a new vehicle, and all this leads to us suffocating,” the importers point out.

Who sells new vehicles in BiH, how tenders are drawn, and which party uses which house to supply the institutions in which it has its officials, the media have been writing for years. Others get the act in vain.

The new act complicated everything

“On March 30, 2022, the Indirect Taxation Authority issued an act to all customs documents in Bosnia and Herzegovina that for used vehicles from the Netherlands released for free circulation in the territory of Bosnia and Herzegovina after April 1, 2022, it is obligatory to send EUR 1, that is the exporter’s declaration for subsequent verification to the Netherlands. For these reasons, our customers from Bosnia and Herzegovina have reoriented themselves to suppliers from other EU countries,” revolting importers of used vehicles tell us. They point out that the vehicles they import are closer to the average wallet than new, and that this is not just a blow to importers, but also to ordinary citizens who buy their vehicles, which are economically accessible to them, and yet of good quality.

However, the lawyers consider that such conduct of the Indirect Taxation Authority is contrary to the provisions of Article 124, paragraph 1 (a) of the Stabilization and Association Agreement between the European Union and Bosnia and Herzegovina, which prescribes:
“The solutions that Bosnia and Herzegovina applies to the community must not lead to any discrimination between the Member States, their nationals or companies.”

In this case, however, this is not the case, and discrimination against Dutch vehicles is more than obvious.

“Since our customers from BiH are giving up orders by the actions of the customs authorities of Bosnia and Herzegovina, we are directly endangered as exporters and demand that this attitude towards exporters of used vehicles from the Netherlands be equated with the attitude towards exporters from other EU members,” they say in a letter to domestic authorities and the EU Delegation exporters. They point out that an administrative stalemate between BiH and the Netherlands is also possible.

“Such actions of the BiH customs authorities will cause a delay in the work of the Dutch administration, will unnecessarily burden the regular operations of exporting companies and thus violate the basic principles on which the improvement of trade between the contracting countries is based.” The customs authorities of the Netherlands will receive probably thousands of proofs of origin for subsequent verification, in a very short period of time, which will cause a stalemate in the Dutch administration”, said the companies importing used cars from the Netherlands.

In addition to our portal, importers addressed the Parliamentary Assembly of BiH, the House of Representatives, and the Committee on Foreign Trade and Customs, asking for clarification of the act they received from the ITA BiH. 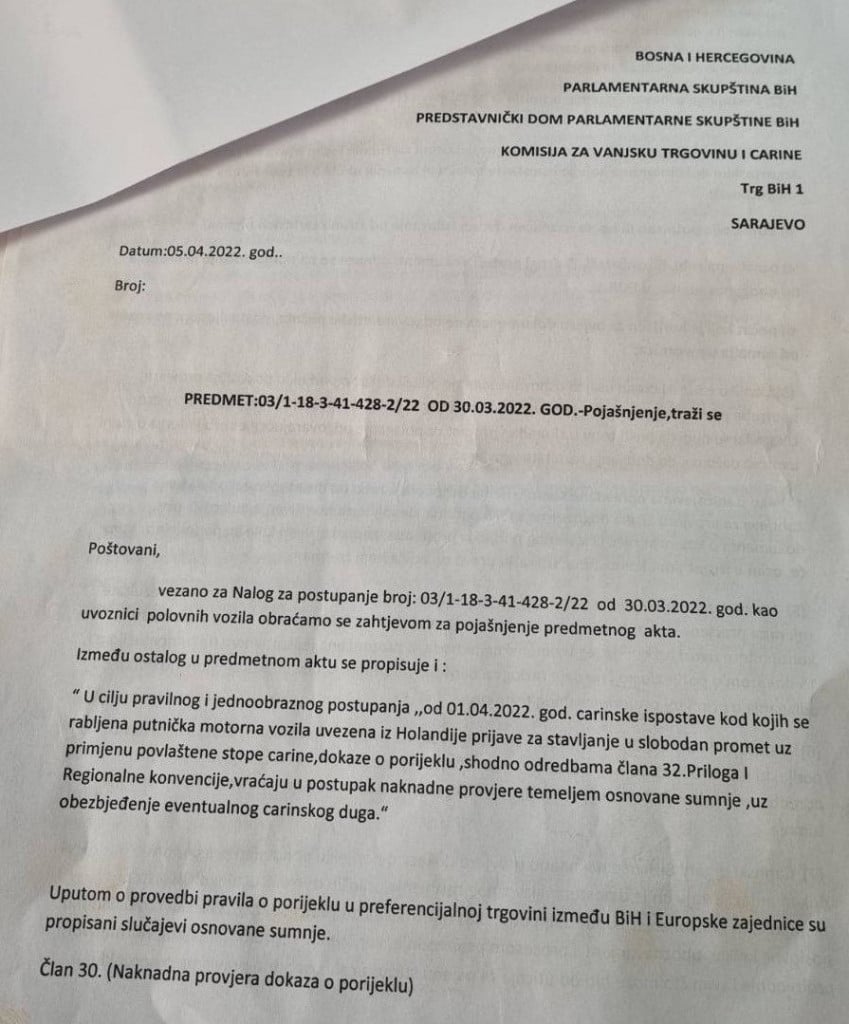 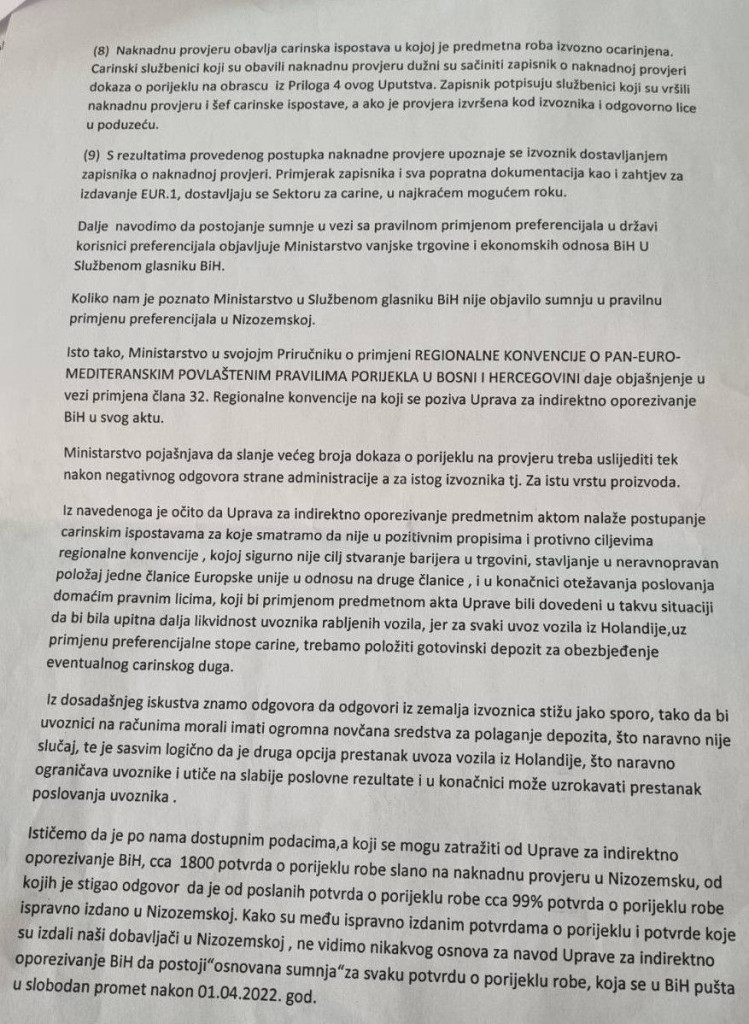 The Indirect Taxation Authority claims that this is not about discrimination, nor favouritism, but equalization.

“The Customs Sector officially, on March 30, 2022, informed the regional centres and customs offices about the knowledge regarding the issuance of proof of origin for used motor vehicles during exports from the Kingdom of the Netherlands to Bosnia and Herzegovina, and taking into account the actions of this country, informed the customs offices where used passenger motor vehicles imported from the Netherlands application for release for free circulation with the application of a preferential duty rate, that from 01.04.2022, evidence of origin, pursuant to the provisions of Article 32. Annexes and the Regional Convention on Pan-Mediterranean Preferential Rules of Origin (“Official Gazette of BiH” – International Agreements, No. 15/14), are returned to the procedure of subsequent verification based on reasonable suspicion, while ensuring possible customs debt. In question are all used passenger motor vehicles from the Netherlands which are released for free circulation from that date, regardless of the date on the invoice, when they were ordered, procured, whether and when they were placed in a customs warehouse. The rules are the same for all used passenger motor vehicles and all importers who attach proof of preferential origin of goods and require the application of a preferential duty rate. Therefore, such conduct was not intended “to make it more difficult for companies engaged in the sale of used vehicles, that is to be in favour of companies engaged in the sale of new vehicles”, as stated by a group of importers, but to harmonize the actions of all countries / Parties to the free trade agreement, which indeed provide many benefits and privileges, but if certain, prescribed conditions are met”, stated in the response to Hercegovina.info from UNO.

Importers, who claim to be completely diametrically opposed, claim that their biggest problem is securing a possible customs debt, where they pay high amounts for something that, of course, will not happen, instead of paying when something happens. Importers claim that about 1,800 (UNO Mostar only) certificates of origin were sent for subsequent verification to the Netherlands and that 99 per cent of the certificates were issued correctly.
Importers from Herzegovina say that they have been brought to the wall by a new act and that they will not give up in the fight for equality, and that they will alert the entire EU on this issue. 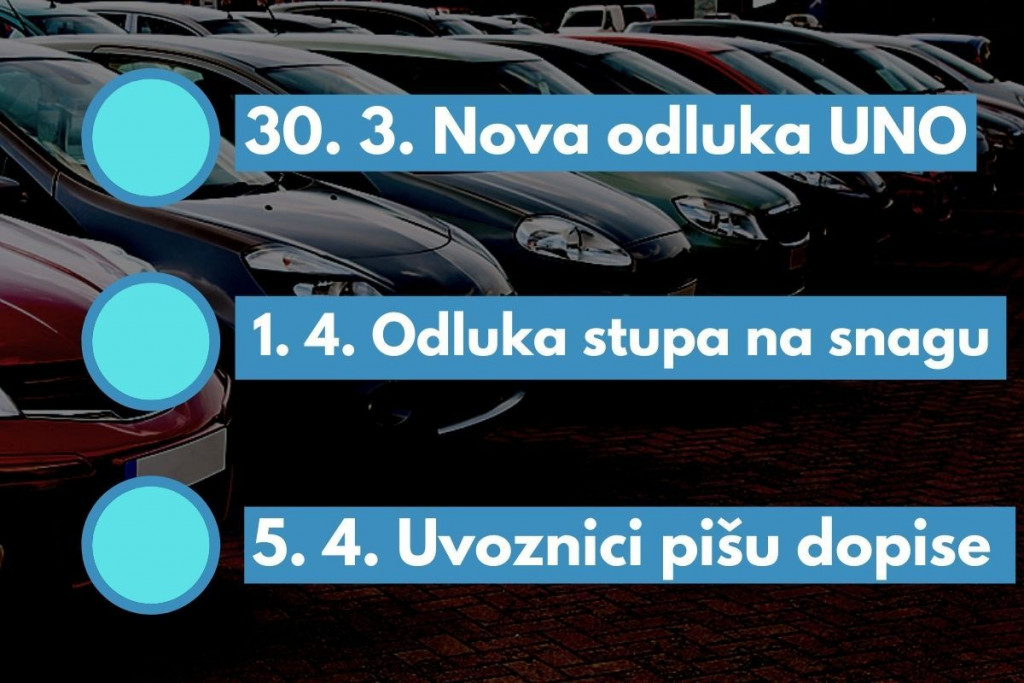 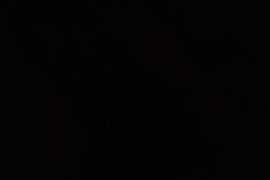 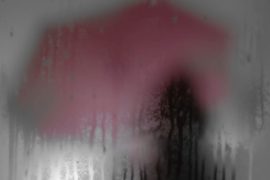 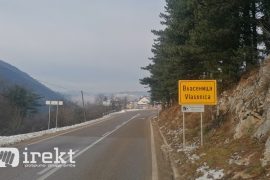