Drunk driving. With a seat belt unfastened. Driving with a drunk driver. The three mistakes that disabled three young men. Even 20 years later, the consequences are felt every day.  In just a single night, the lives of the three young men and their families changed.

When he was 21, Bojan Šuvira from Janja went to a party in his neighbourhood. He knew he would be drinking alcohol, so he intentionally left his car keys home and took a walk to the party.  After the party, his friend invited him for another drink in a nearby bar. However, it wasn’t just one drink; they had the second, the third, the fourth one…and so on. A few hours and lots of alcohol later, they went home. His friend drove.

“We were all quite drunk. The driver started to drive like mad. We told him to slow down as we didn’t want to die young. When we turned off the main road towards the house, he suddenly stepped on the gas and the car started to go from left to right”, Bojan recalls.

The car went off the road and started to overturn. Of the four people, only Bojan got injured. He had his seat belt fastened. His friends started running away from the car, which caught fire. They suddenly realized he was still in the car.

“They returned, extinguished the fire and put the car back on its wheels. As I was lying with my head out of the car, I didn’t know I was badly injured. When they brought the car back on its wheels, my arms fell by my side and my head began to fall forward slowly. The ambulance came quickly and they transported me to Bijeljina. Until we got to Bijeljina, I had already been clinically dead once, but they brought me back to life. In Bijeljina, I was clinically dead one more time and then transported to Belgrade”, he recalls that evening.

In Belgrade, after the operation, he found out he would never walk again. His cervical vertebra and spinal cord were injured. The left lung was not functioning. After a stay in the hospital, he was referred for rehabilitation. He spent nine months in the spa. He learned everything all over again. How to shave, move from bed to wheelchair and vice versa. Over time, he began to use his hands again. He still hasn’t regained the full function of his hands.

“All the therapists were proud of me for being mentally stable and for always giving my best. When they saw that my hands were hurt, that I can get from the wheelchair to the bed by myself, turn around, get back into the wheelchair, shave and walk a few kilometres alone in the wheelchair… I got the most out of me”, Bojan tells us.

Today, 10 years after the accident, he shares his story with others. He wants others to learn from his experience. He advises young people to always have money for a taxi or a phone to call their parents. If the whole company goes out, one person should be sober and responsible for driving. Every subsequent time, this can be another person.

In pain for last 23 years

As a fresh driver, Dejan Trninić from Banjaluka hit a tree at the age of 18 and suffered serious injuries. He admits to drinking with his friends all night and then getting behind the wheel. He was driving too fast and lost control.

“I don’t remember the details. My first recollection is waking up in the hospital at the Department of Neurosurgery in Banja Luka, being transferred to the operating table and turned on my stomach. The next memory is waking up from anaesthesia and a neurosurgeon telling me I had suffered a spinal cord injury. More precisely, I had a fracture of the second and third lumbar vertebrae. I then realized I couldn’t feel anything below the belt, I couldn’t feel my legs but I had no idea what had happened to me. I thought that I would return to normal life after a few days, go out and continue my studies. However, that never happened,” Dejan tells us.

For the next two months, the only thing he could see was the ceiling of his hospital room. He was immobile. The rehabilitation took two years. Because his spinal cord was not severed, he was able to walk again. Today he uses crutches and orthopaedic aids. However, he can’t feel his legs and still has bits of the windshield inside his head. Even 23 years after the accident.

“I have never fully recovered. Of course, I continued with my life, my education, graduated from university, found a job and started building a career. “I met a girl who accepted me as I am and she is now my wife, Nikolina,” he tells us.

The accident completely changed the course of his life. He says that he wonders every day what kind of man he would be today if he hadn’t got behind the wheel that evening. As he points out, his life today is fulfilled life. But first, he had to make peace with himself and admit his mistake. To continue living. He is reminded of that night every day by the pains he suffers.

The belt could have reduced the injuries

Leaving the gas station in his car, Zoran Vujin from Banja Luka forgot to fasten his seat belt again. Trying to pass one of the drivers on the road, he ran off the road. Because he was not wearing his seat belt, he hit his head on the passenger door and got instantly paralysed. He has been in a wheelchair for 24 years.

“My life turned completely upside down because… Just imagine someone who works, does sports, lives a fully active life together with his family… My son was a little over a year old then and my wife… You become someone who needs other people’s help to do common things we do every day without thinking about them. So, everything turned upside down. Not only my life but the life of my family as well. A person who could fully contribute to everything becomes a person who needs help”, Zoran tells us.

Great changes have also taken place on the psychological level. At first, it was difficult for him to accept what had happened and the fact that he could not function without the help of others.

“When I came home after all those treatments, I felt the burden of my position just by having to ask for someone’s help to do little things, common things around the house and so on. Being unable to contribute to your family as much as you would like is also a great change,” he recalls.

Today, Bojan, Dejan and Zoran jointly run the Association of Victims of Traffic Accidents named “Step”. In addition, together with the Traffic Safety Agency of the Republika Srpska, they visit secondary schools and tell their life stories to the graduates. The goal is to encourage them to be responsible drivers and prevent them from making the same mistakes.

“The reactions of all high school students are very positive. They react emotionally. After the lecture, they come and congratulate us on our courage to share our life stories with them. My usual message at the end of the lecture is that clever people learn from other people’s mistakes. As a saying goes, I would like someone to learn something from my mistake rather than making their own. This will greatly help them all”, Zoran believes.

During the last year, they shared their experience with 2,500 high school students in 15 towns. For the campaign to be fully effective, about 7,000 high school graduates should hear their stories.

“The goal of the project is not to cause pity, nor some kind of empathy. We want, and this is what we often say, that our story does not become their story. In my case, my mistake, the guilt that I admit before to them is that I behaved irresponsibly in traffic. I consumed alcohol, drove fast and didn’t fasten my seat belt. If I hadn’t done those things, I certainly wouldn’t have had such a serious accident,” admits Dejan.

In making contact with secondary school students, the fact that they were around the same age when the accidents happened helps a lot.

“As young people, they may not even be aware that young drivers are the most vulnerable category in traffic. And not only that, but traffic accidents mostly take the lives of the young. Globally, most young people lose their lives in traffic accidents compared to all other reasons such as natural death, disasters or wars That is one fact they should keep in mind. Therefore, they have neither life nor driving experience, so they don’t know what can happen to them, just like I didn’t know when I was their age,” Dejan points out.

A third of those who died in car accidents consumed alcohol

“In 95 accidents in which 101 people died, about 30% of the people drove while under the influence of alcohol,” Nikola Torbica of the RS Traffic Safety Agency tells us.

“We cannot be happy with these indicators. We need to have greater use of seat belts. The European Union countries have about 90% to 95% use of seat belts, less use of phones and significantly better safety. Therefore, we must follow their example to improve our road traffic safety”, he points out.

However, all this we are talking about is the viewpoints of road users. The enforcement of road safety legislation and subsequent behaviour change is a difficult and long-term process. It implies prevention and punishing. The Agency advocates for prevention. However, when prevention fails, punishment is also necessary.

“A positive attitude is when one fastens a seat belt not because of the police but to improve their safety. When one doesn’t use a phone while driving because they know it increases the risk of an accident. We have to start with the education of children. When parents wear a seat belt, the children follow their example. Kids will adopt such behaviour and will certainly get used to fastening a seat belt later. They will adopt the behaviour pattern and fasten seat belts in the future. After the education at home during childhood, children learn about traffic safety in kindergartens, primary and secondary schools and then come lectures in driving schools, which results in young drivers with positive attitudes”, says Nikola Torbica.

The increased popularity of social networks causes another risky behaviour in traffic – making videos while driving. It is typically a driver making a video of their fast driving or the landscape they drive through. This image-boosting practice endangers the safety of all road traffic participants.

“That is predominantly the case with teenagers and young people. Teenagers may be expected to believe that they would gain a better social status with such behaviour. However, adults should be more socially involved in this respect as they are aware that such behaviour may endanger the young who behave so.  Being a passive observer and taking no action is unacceptable.  We should be objective and comment on such behaviour unfavourably to suggest to those persons that their behaviour is socially unacceptable and earns a bad reputation”, says Nikola Torbica.

It is especially problematic when such videos are shown by celebrities, who are very popular and are massively followed by the youth. All this leads to endangering the safety of all traffic participants and, ultimately, lifelong consequences. 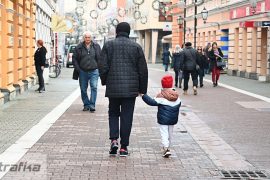