For the last five years, the Service for Affairs with Foreigners of Bosnia and Herzegovina has granted 377 permanent residence permits and 1,498 temporary residence permits to Chinese citizens, of which 413 were granted last year alone.

During that time, the republican inspectors controlled only one Chinese company in Srpska, and to make the miracle bigger, they were controlled by labour and occupational safety inspectors, who found the absence of an Act on risk assessment for workplaces as the only deficiency. This is rather strange considering that according to the data of the Agency for the Promotion of Foreign Investments in BiH (FIPA), the value of Chinese investments in BiH ranges between 1.9 and 2.9 billion euros, and almost all projects are in the field of energy and infrastructure.

On the other hand, it should not be surprising that inspectors in the RS do not go for inspection when most of the contracts, which are measured in hundreds of millions of marks, are hidden from the public. Thus, the contract for the construction of the Banjaluka – Prijedor highway worth 600 million marks, which was signed with the Chinese company “Shandong Hi-Speed International (SDHS)”, is not available to the public.

In the same way, the public had no insight into the contract on financing, designing, and building the section of the Vukosavlje-Brčko highway worth 765 million KM, which was signed in August of last year with the “China State Construction Engineering Corporation Limited”.

Contracts hidden from the public

In addition, in 2014, “Autoputevi RS” signed a preliminary agreement with the Chinese state company “Sinohidro Corporation Limited” for the construction of the Banjaluka-Mliništa highway. A commercial contract was also signed with that company in 2016, everything was supposed to be financed by the Chinese “Exim Bank”, but to date, there has been no serious progress in the realization of that project. As for the aforementioned, the public does not know the details of this project either, except that the roughly estimated value of the works on the 62-kilometre section is as much as 600 million euros.

Because of all this, the question arises as to how it is possible that the competent inspectors did not control the operations of Chinese companies. Of course, this does not mean that any of these companies are doing something illegal, but it is unnatural for the government to sign extremely valuable contracts with them on the construction of the most important infrastructure projects, without checking or controlling their implementation, how workers’ rights are respected, etc.

The Department of Labor Inspection and Safety at Work confirmed for CAPITAL in the RS Inspectorate that for the past five years it has carried out inspections at the employer “Everit” with headquarters in Janka Veselinovića Street in Banja Luka.

“After the inspection and established factual situation, the acting inspector ordered the adoption of an Act on risk assessment for workplaces in the working environment, and to determine the method and measures for the prevention, elimination and reduction of risks in accordance with the Occupational Safety and Health Act, to enact an ordinance on occupational safety that will determine the rights, obligations and responsibilities in the field of occupational safety and health, and that all employed workers are theoretically and practically trained for safe and healthy work (seven of them)”, it is stated in the reply from the RS Inspectorate. 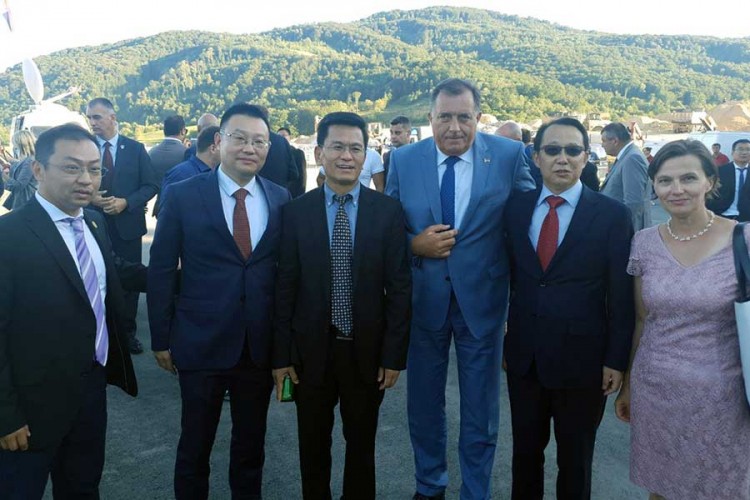 The acting inspector, it is said, carried out the control of the execution of the decision and established that the company “Everit” carried out all the ordered measures within the legal deadline.

Data obtained by CAPITAL confirm that all Chinese companies registered in the RS are connected and operate under the control of the Chinese state.

A billion-euro project without workers

What is interesting is that the company “China Shandong International Economic & Technical Cooperation Group Ltd”, with whose representatives the Prime Minister of Republika Srpska Radovan Višković discussed the construction of a strategic project worth close to one billion euros on December 29 in the RS Government, has no employees. According to data from APIF and the Tax Administration of the RS, at the end of November last year, the aforementioned Chinese company did not have any employees in its branch office in Banja Luka.

“During the meeting, it was noted that the works on the construction of the Banja Luka – Prijedor highway are being carried out in accordance with the foreseen dynamics and the created preconditions, and it was announced that they will be further intensified in the spring, with the beginning of the new construction season. The Chinese delegation, led by the deputy director of “Shandong” Zhang Jianchao, conveyed that by September 2023, the conceptual project of the continuation of this road, on the route from Prijedor to Novi Grad, will be completed”, the Government of the RS announced after the meeting.

And that all the companies are connected is best shown by the fact that the media previously reported that the contract on the construction of the Banja Luka – Prijedor highway was signed with the company “Shandong Hi-Speed International (SDHS)”, and now the above-mentioned “China Shandong” is associated with the project International Economic & Technical Cooperation Group Ltd”.

According to APIF data, at the end of November, the company SDHS had seven employees, and their average salary was 1,390 KM.

Of all the Chinese companies that signed various contracts on the implementation of infrastructure and energy projects in recent years, the most employees, 37 of them, were in the only controlled company – “Everit”, and the employees of this company have an average salary of 1,420 KM.

It is followed by “China National Aero-Technology International Engineering Corporation”, whose business unit in Foča has 23 employees. Their average salary is 900 KM.

At the end of November, the Trebinje branch office “China Gezhouba Group Company Limited” had 11 employees each, and they had an average salary of 1,190 KM, and the Banja Luka business unit “China Sinopharm International Corporation Central and Eastern Europe Branch” whose employees receive an average of 1,520 KM.

Related companies at the same address

The last mentioned company “China Sinopharm” and the company “SDHS” are registered at the same address in Banja Luka – Mladena Stojanovića 117a.

However, the data of the Service for Affairs with Foreigners of BiH, which say that based on invitation letters from two Chinese companies, more permits for temporary residence were issued than there are employees in these companies, are particularly confusing.

“On the basis of the invitation letter of the legal entity “China Gezhouba” – Trebinje Business Unit, 17 temporary stays were granted to Chinese citizens”, it is stated in the response of the Service for Affairs with Foreigners to CAPITAL’s questions.

Given that 11 people are employed in that company, the question arises as to where are and what are the six Chinese citizens, who have been granted temporary residence in Bosnia and Herzegovina based on invitation letters from the company “China Gezhouba”, doing if they are not employed by that company. 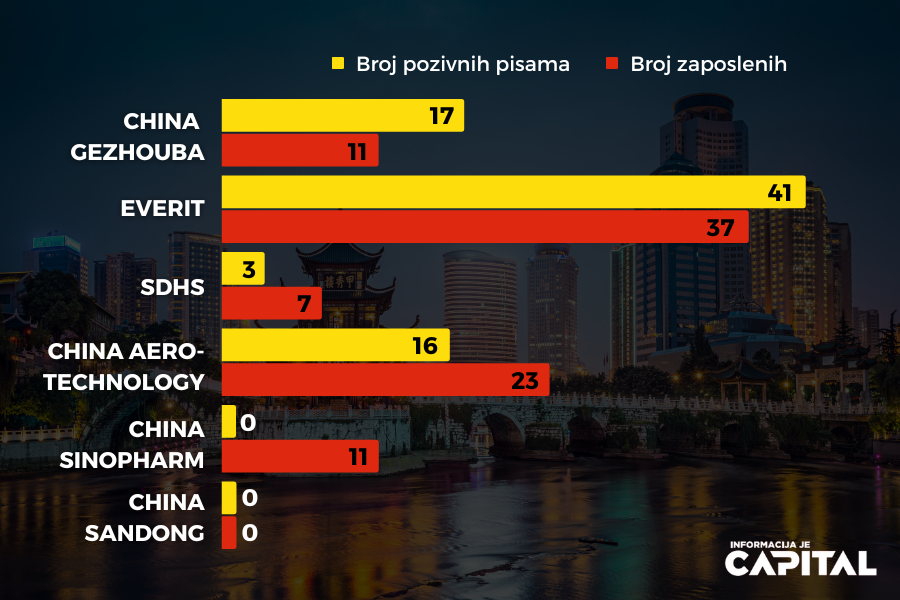 Our interlocutor from the Service for Affairs with Foreigners says that the only possible answer is that temporary residence permits were issued earlier and have expired in the meantime and that they have returned to China or are staying illegally in Bosnia and Herzegovina.

He explains that during the last year, inspectors for foreigners carried out inspections of the stay of foreigners in companies and institutions where foreigners work on the basis of a work permit, as well as in companies where the founders are foreign nationals.

Our interlocutor explains that the fact that there are more employees in these companies than temporary residence permits issued means that the local population is employed, pointing out that it is also possible that some of the Chinese people who received temporary residence based on an invitation letter from “China Gezhouba” or “Everit” are employed in these companies.

“That’s already a job for the RS Inspectorate”, concludes our interlocutor.

Nataša Vukoje from the Republic Labor Inspection explained to CAPITAL that the employment of foreign workers is defined by the Law on the Employment of Foreign and Stateless Persons, stressing that the supervision of this law is the responsibility of the Labor Inspection.