During 2019/2020, the municipality of Stanari started and implemented the construction of a new sewage system, and the company “Nikolić” from Prnjavor, owned by Bogdan Nikolić, got the job.

In all of this, there might not have been anything controversial if the company had not carried out the work without the necessary permits, more precisely, the biological treatment plant was built without project documentation and a construction permit, which resulted in the citizens of this municipality still not being connected to the new sewage system. The whole job was worth over 600,000 convertible marks, and it was started at a time when the mayor of this small municipality was SNSD’s Dušan Panić.

The current mayor of the Stanari municipality, Radojica Ćelić from United Srpska, made sure to make things more interesting. Immediately after taking over the four-year mandate, he lashed out at the previous head of Stanari, identifying him as the main one responsible for illegal construction. In the interview on 17.8.2022 given to the portal Pozitivnasrpska.com from Prnjavor, Ćelić openly talks about illegal construction.

“Since the biological treatment plant was built without project documentation and a building permit, we are currently investigating whether it is at all possible to connect the remaining part of the settlement to such a biological treatment plant, there are schools, residential buildings, individual residential units and they are all still connected to the old sewerage system. That work cost about 600,000 KM, and part of the payment of 323,000 KM was realized in November 2021. The contract and the first part of the payment were realized during the time of the previous chief, and in 2021, according to the contract, we were obliged to honour the remaining part of the payment”, he said. Ćelić then noted that the municipality of Stanari had filed a criminal complaint with the competent prosecutor’s office against the company “Nikolić” and the former head of Stanari, Dušan Panić!

However, today neither the municipality of Stanari nor Ćelić are making any announcements about this case, and as the Infoveza portal unofficially learns, the striking silence comes after the visit of the owner of the construction company Bogdan Nikolić to the municipality of Stanari. Čelić has now gone to the other extreme – to the extent that he violates the Law on Freedom of Access to Information of Republika Srpska, because even after 15 days and our reminder of the query we sent him, he did not want to answer a few simple questions. Our portal was interested in, among other things, the answer to the question of which supervisory authority supervised the implementation of the sewage construction project, as well as the criminal complaint that Ćelić filed against the company “Nikolić” from Prnjavor.

Local journalist Dejan Simeunčević tells Infoveza that the construction of the sewerage system in Stanari is just one example of how the “tycoons’ mouths” are fed at the expense of citizens, but he also points the finger at the current mayor of Stanari. 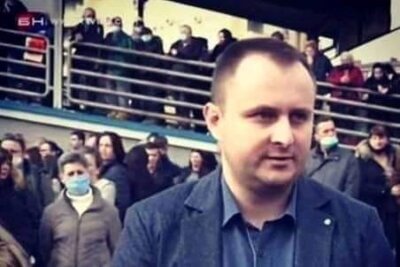 “What will be very interesting is the fact of how and why the current mayor Radojica Čelić stopped talking about this topic, although he himself confirmed that his predecessor as mayor paid 600,000 KM to the company Nikolić on this job for work that was not completed. For the interview he gave for my portal Pozitivna Srpska and the incredible details he revealed then, the Nikolić company filed a lawsuit against me as the editor of the portal, and when I asked Čelić to confirm everything he said in the interview then, Čelić said let’s not involve him in that, because it is apparently not in the interest of the municipality of Stanari”, points out Simeunčević and asks if the municipality and its citizens are interested in the 600,000 KM “thrown down the drain”?

Interestingly, Bogdan Nikolić is identified in the public of Prnjavor as the real owner of the hospitality facility/night club “Aquarius” in Prnjavor, and in the garden of that facility, believe it or not, there is a transformer station! For more than a year, the facility has been working without any necessary permits defined by the Fire Protection Act, and in mid-2022, the Ministry of Internal Affairs, to the general surprise of the residents of Prnjavor, will provide it with the necessary permit. At the beginning of the year, the then-deputy of the SDS in the National Assembly of RS, Miladin Stanić, also spoke about the whole case and presented previously unknown information to the public.

“You have a situation where drugs are being sold in a club in Prnjavor, where the police are not allowed to enter, and the club has no fire protection. None. Even those who have this “job” of drug dealing ask me how I am confident enough to comment”, said Stanić at the time.

On the other hand, Simeunčević repeatedly pointed out this problem and considers the silence of the competent institutions to be scandalous.

“I call on them to finally explain to the public whether this nightclub has the necessary permits or not, because if it doesn’t, the only logical thing is to close the club immediately. In addition to the security factor, which is most important in this story, it is very important to show that individuals cannot be above the law and rules that should apply to everyone, even if your name was Bogdan Nikolić, you were close to the Dodik family, financed the government and the opposition… They simply cannot”, Simeunčević is categorical.

Another interesting thing in all this is the fact that the land on which the club is located was owned by Elektrokrajina, and Nikolić bought it at an extremely favourable price. By the way, since 2013, “Elektrokrajina” has been regularly “rewarding” the company “Nikolić” from Prnjavor with lucrative jobs for clearing brush and vegetation under power lines.

According to the Capital portal, the owner of the company “Nikolić” Bogdan Nikolić in Prnjavor is said to be close to the family of Milorad Dodik, that is, to his brother Goran Dodik, which he himself brags about. Nikolić was at the centre of the story about a group of men from Serbia that caused a mass fight in Prnjavor before the elections in 2016. According to the then Minister of Security of BiH Dragan Mektic, that group was brought to Prnjavor before the local elections with the aim of causing disorder, however, Nikolić denied these statements.

The company “Nikolić” has not answered our questions by the time of publication of this text.