With the additional contract on public procurement, the price that the municipality of Nevesinje will pay for the installation of LED lighting exceeds 550 thousand KM.


Initially, the public procurement contract stipulated that approximately half a million KM would be paid for 877 light bulbs. The job was awarded to the Banja Luka company “Roaming Networks”, whose offer was only 27 (twenty-seven) KM lower than the maximum estimated purchase price.

The new, additional job, which was awarded to the same bidder through a negotiated procedure without publication of a notice, will cost 43,692 KM without VAT.

As expected, the job was won by the same bidder. And the reason for the additional procurement is the “new situation” with the construction of the roundabout and “newly built settlements”, which have been in the same place for years, that is, decades.

The conditions in the tender documentation, which have been changed several times, have helped this bidder, which has been one of the serious favourites of public procurement in Republika Srpska in recent years.

The decision on the selection of the most favourable bidder, which was signed by the mayor Milenko Avdalović on August 27 last year, accepted the offer of “Roaming Networks” from Banja Luka. 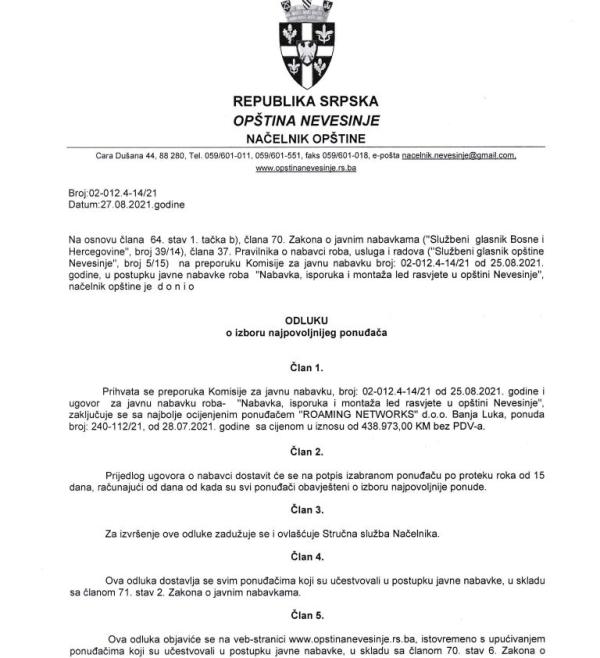 This company requested 438,973 KM without VAT for the public procurement “replacement of public lighting with LED lighting”.

The tender, which was originally announced on March 16 last year, estimated the total value of the procurement at 439,000 KM without VAT.

The deadline for submitting bids was April 2, 2021.

The “lowest bid price” was used as a criterion for selecting the best bidder, but “Roaming Networks” had no competition.

Two more bids were received for the tender, which were assessed as unacceptable due to non-fulfilment of the conditions prescribed by the tender.

At least that is stated in the explanation of the decision on the selection of the most favourable bidder.

The bid submitted by the bidder “Projecta d.o.o. Mostar”, as it is stated, was rejected due to non-use of the form that was changed after the change of the tender and because the goods offered did not meet the specification from the tender documentation.

The company did not want to comment on the participation in the public procurement, nor the reasons why they were rejected, with the explanation that “they never do that in principle”.

The third offer was sent by a consortium consisting of the Banja Luka company “Nexen” and “Neos” from Mostar.

However, the company “Nexen”, which applied for the tender together with “Neos” d.o.o. Mostar, confirmed to us that they had objections to the public procurement procedure and started the appeal procedure. However, as they say, when they estimated that the appeal would cost them too much with little chance to change anything due to the existing rigid conditions of the tender, they gave up.

As a condition that bidders must fulfil in order to participate in this public tender is proof that they have made a profit of at least one million KM in the past three years (until the tender was announced), that is, since the beginning of business, if they were registered less than three years ago.

Also, another condition is that the bidder has realized at least one contract in that three-year period, whose value without VAT is not less than 430,000 KM, or two contracts, whose total value is at least that much.

The number of potential bidders, who would respond to the tender under such conditions, has been reduced to a minimum.

That is, probably, the reason why the mayor of Nevesinje, Milenko Avdalović, decided to change the tender conditions.

The new deadline for submitting bids is May 27. The decision made by the mayor on May 18 did not ask the bidders for a million profit in a three-year period. That amount has now been reduced to 800,000 KM. 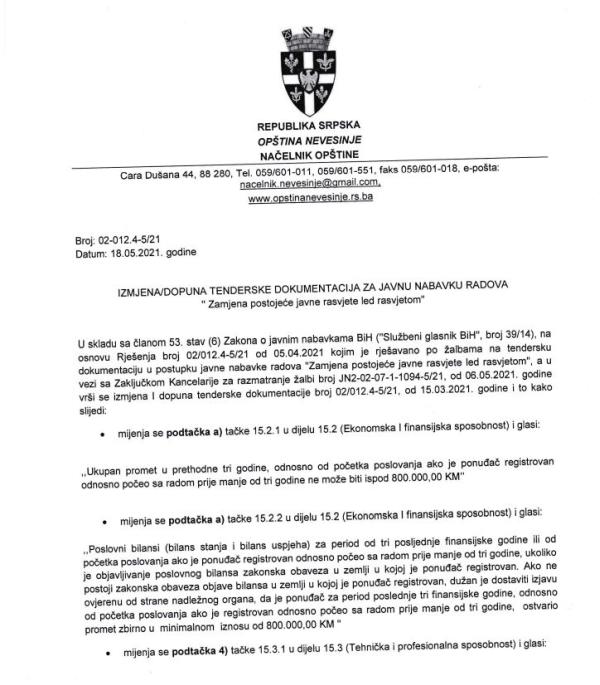 But just days before the new deadline for submitting bids expired, the mayor made a decision to suspend the public procurement procedure.

As an explanation, “an appeal against the tender documentation by one potential bidder” was stated.

The notice on the annulment of the procurement procedure, which was published on June 16 last year, states as an explanation: “Error in the tender documentation, which caused the incorrect application of material regulations.”

The mistake in question can be seen from the new public procurement notice, which was published on June 18.

In the original notice on public procurement, the one from March, the main subject of the procurement was stated: “Electrical installation works”, and an additional: “Road lighting”. 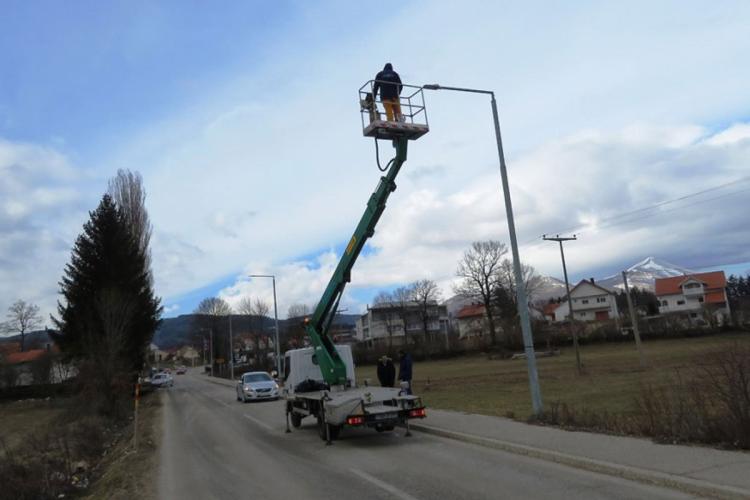 After all, it is difficult (impossible) to find a company that deals with the same business and has realized a contract worth 430 thousand KM in the past three years, thus fulfilling that condition from the tender.

It was this company that changed the public lighting with LED lighting in the municipality of Rogatica in 2019. Interestingly, according to the “same rules” as in Nevesinje.

Just like in Nevesinje, only a few months later, the Rogatica authorities remembered that they would need more light bulbs. So, the same bidder got an additional public procurement job worth nearly 80 thousand KM.

Tenders are changing, deadlines are being broken

The contract for the public procurement of the replacement of public lighting with LED lighting in Nevesinje was concluded on November 12 last year. Therefore, according to the prescribed deadline of 120 days, the works should have been completed by mid-March. However, as already mentioned, additional works have emerged.

We did not find out how much the municipality of Nevesinje really allocated funds for the work of replacing light bulbs for each item of the contract. We did not receive a response to the request for access to information, which we sent to the mayor of this municipality in time.

“The government in Nevesinje has lost all rational attitude towards public funds, which is evidenced by this public procurement and additional procurement of works. I guess it was known at the very beginning how many light sockets we have and how much lighting we need. And the fact that every month or two according to the established practice, as for all other works, they go to additional tenders, it is also a violation of procedures and damage to the public interest. This only shows how frivolously the government enters into certain affairs and that, of course, someone has their personal benefit there”, says Vasiljevic. 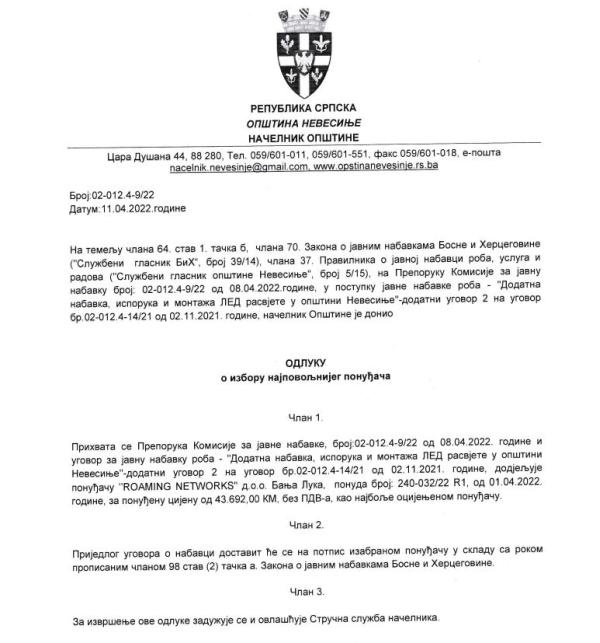 The municipal authorities miraculously overlooked that the lighting would be necessary both on the roundabout and in front of the school in the city centre, so they started a public procurement for additional works. The decision on the selection of the most favourable bidder for this additional procurement was signed by the mayor on April 11 this year.

The explanation states that the only received offer, the one sent by “Roaming Networks”, was accepted as the most favourable.

Due to the new situation resulting from the arrangement of the roundabout and plateau in front of school buildings, and the expansion of public lighting in newly built settlements, there was a need for delivery and installation of goods of the same technical characteristics to form a single whole and avoid major aesthetic deviations, since a narrower city centre is in question”, it is stated, among other things, in the explanation of the additional procurement.

However, it is not clear to anyone what the “new situation” is and whether the authorities in Nevesinje have only just noticed that they have a roundabout in the city centre and settlements that began to emerge immediately after the war.

It is difficult to predict whether there will be more “new situations”. In any case, the Municipal Assembly of Nevesinje recently adopted a decision on the allocation of an additional 60 thousand KM for the needs of the public lighting project. 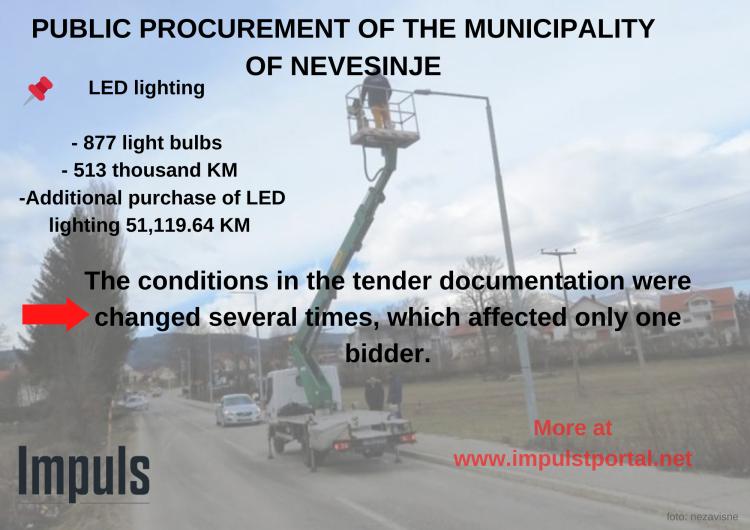