Despite the obvious irregularities, the University Rectorate selected a candidate who did not meet the criteria and proposed a procedure for his appointment as a docent. Since January 2021, when the final verdict on the annulment of the election of the candidate (Professor Besim Salkić) was passed, he has been working illegally, and the rector does not want to implement the court’s decision.

The Tuzla Municipal Court has confirmed the indictment of the Tuzla Canton Prosecutor’s Office against the rector of the University of Tuzla, Nermina Hadžigrahić, who charges her with abuse of office and authority, Inforadar found out.

According to the indictment, Hadžigrahić abused her position in order to illegally employ one of the candidates for the position of assistant professor at the Faculty of Technology.

RECTOR HADŽIGRAHIĆ ABOVE THE LAW

The indictment against the rector is the result of a four-year struggle by Meho Majdančić, an assistant at the Faculty of Technology in Tuzla, after he was rejected for the position of assistant professor due to corruption at this university, although he was the only candidate who met all conditions for this public call. Majdančić and two other candidates who, according to him, did not have the right to participate in the competition, applied for the announced competition at the University of Tuzla “for the invitation of an assistant professor with the possibility of employment”.

However, despite the obvious irregularities, the University Rector’s Office selected a candidate who did not meet the criteria and made a proposal to go into the procedure of appointment as an assistant professor. Majdančić then filed an appeal, which was rejected, and after that, he reported the illegalities to the competent court.

Despite court decisions that the appointment was illegal, the University Rectorate continued to ignore these decisions, thus placing itself above the law.

Majdančić claimed that the rector of the University of Tuzla, Nermina Hadžigrahić, was behind all these events, which was finally confirmed by the indictment. 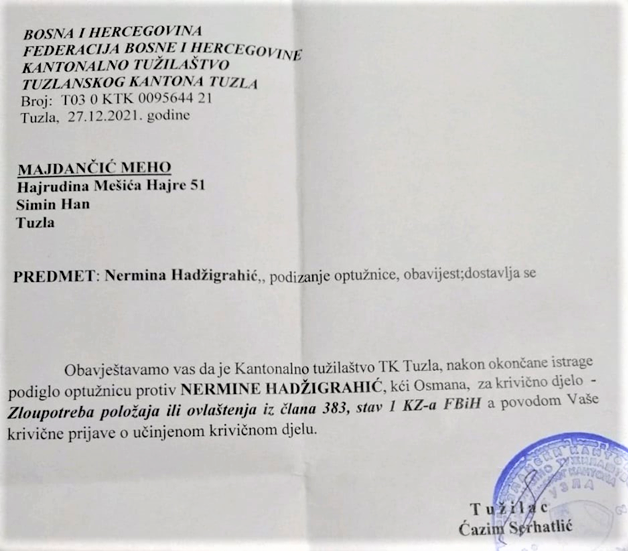 Photo: Facsimile of the TK Prosecutor’s Office’s response to the indictment against the rector following Majdančić’s criminal charges.

“After I reported the illegalities to the Court, the Court ruled that these actions were illegal and should be annulled. After the University Rector’s Office ignored this court decision, I filed a criminal complaint against the rector of the university, Nermina Hadžigrahić, who is also a signatory of these decisions “, says Majdančić. He believes that he was eliminated due to the political connections between the rector and the candidate who was persuaded to win this position.

“Besim Salkić, SDA candidate for the Tuzla Canton Assembly in the last elections, was elected on the docent position. Decisions in the Rectorate were made in favor of Salkić due to political-friendship relations because Hadžigrahić is close to the PDA and SDA “, Majdančić points out. 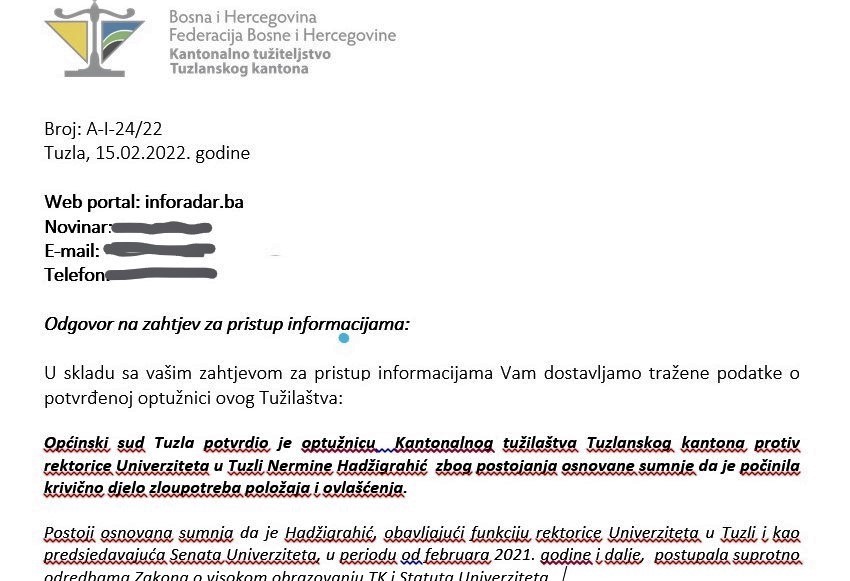 Photo: The TK Prosecutor’s Office submitted an answer to Inforadar that the court had confirmed the indictment against the rector

The indictment against the rector states that, “although she was aware that in connection with the announced public competition for the selection of candidates for docent position in the scientific-teaching field” Plant Production, Forestry and Fisheries” at the Faculty of Technology, a lawsuit is pending after the decision on the selection of candidates for the said scientific-teaching title from January 2018 was annulled by the final judgment of the competent court in January 2021, it did not take the necessary actions in order to implement the final judgment.”

In the indictment, the competent court proposed that Hadžigrahić be banned from performing the duties of rector of the University of Tuzla for at least five years and that, as a property claim of the injured party, the employment contract between the University and Professor Salkić, who works as a docent, be annuled.

“Hadžigrahić did not make a decision on termination of employment, nor a decision on continuing the procedure according to the previously announced competition, which enabled this person to benefit in the form of continuing employment and all other employment rights in the period from receiving a written copy of the court ruling in February 2021 to the present day. Therefore, as an official person in the Federation of BiH, by failing to perform her duties, she gained the benefit for another person “, it is stated in the indictment. 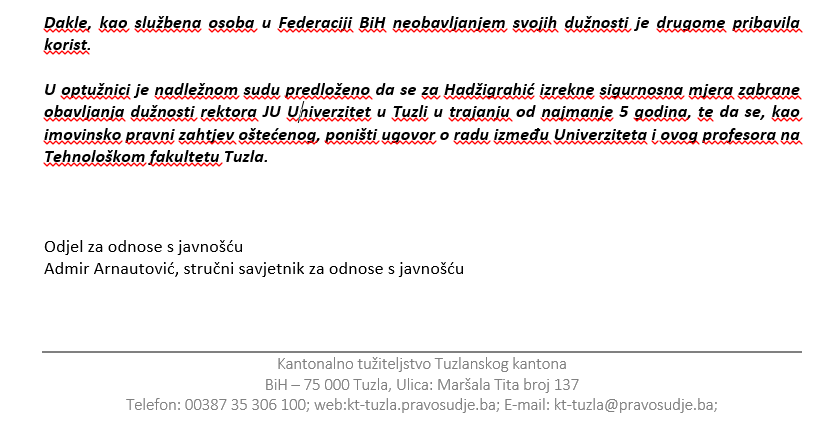 Inforadar also addressed questions to Rector Hadžigrahić so that we could hear her side of the story, but our questions were not answered.

We remind you that this is not the only case of corruption at the University of Tuzla. Sharing important positions outside the law is tied to some other names at this university. Also, Professor Feriz Adrović from the Faculty of Science announces that he will seek justice in court. After 40 years of work, he was prevented from completing the research project he started earlier. Although he has the right to have his contract extended to complete a significant project, he was sent into retirement and banned from entering the Faculty of Natural Sciences. Professor Adrović recently publicly warned about controversial staffing at the University of Tuzla, as he has been warning about corruption and controversial staffing at the University of Tuzla for years, which is why he is under pressure.

“Politics controls the University of Tuzla and everything is resolved like in a market. They put parties in positions, and true professors are silent because they are afraid. Everyone at the University of Tuzla is silent, and the University is collapsing every day, development and life on it depends on a small group of like-minded people. My son has a doctorate in a rare field of genetics, and he has been in the bureau for 12 years. He can’t get a job because they are taking revenge on me for my attitude and public criticism of this university “, says Adrović. He recently and publicly warned that the University of Tuzla was and remained party booty, “a training ground for party survival, where autonomy is buried by the rigid tendency of party terror and the insatiable career obsession of individuals.”

“There are many dignified and capable professors from various scientific fields at the University of Tuzla, but they are obviously purposefully suppressed, underestimated, and discriminated against,” Adrović emphasizes.

The indictment against the rector was confirmed just days before the Card of the Revolution was conducted by students at the University of Tuzla, demanding better education and the prevention of corruption at the university. 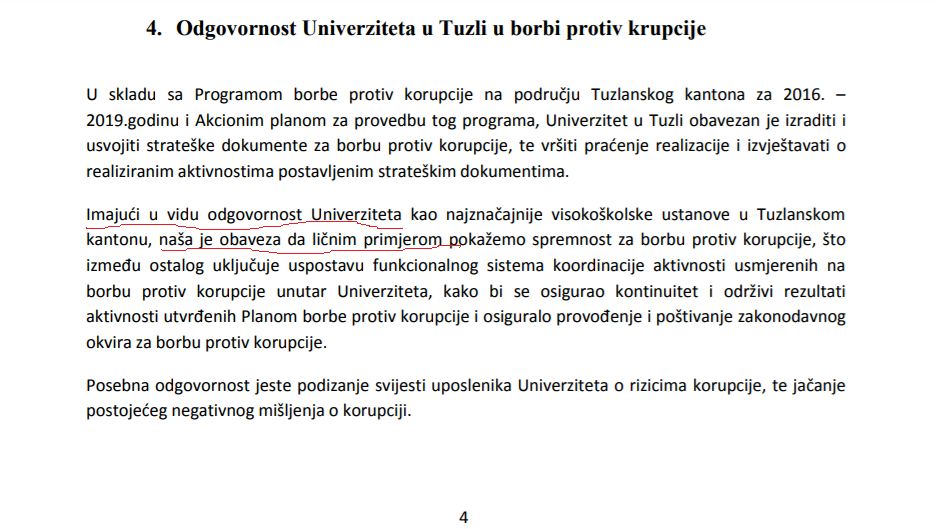 In support of students, we remind readers, students, and employees of all universities in BiH of the definition of corruption taken from the Anti-Corruption Plan of the University of Tuzla: 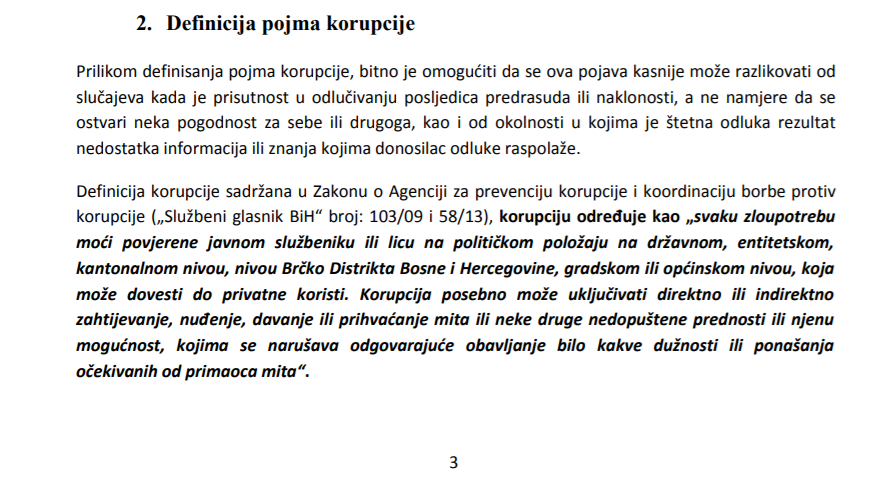 Cases of corruption in education are widespread in BiH. At the end of October last year, Inforadar published a story about party stamping of diplomas at private faculties, one of which is the European University Kallos, located in the center of Tuzla, in an office building where – in addition to studying – you can gamble and shop. 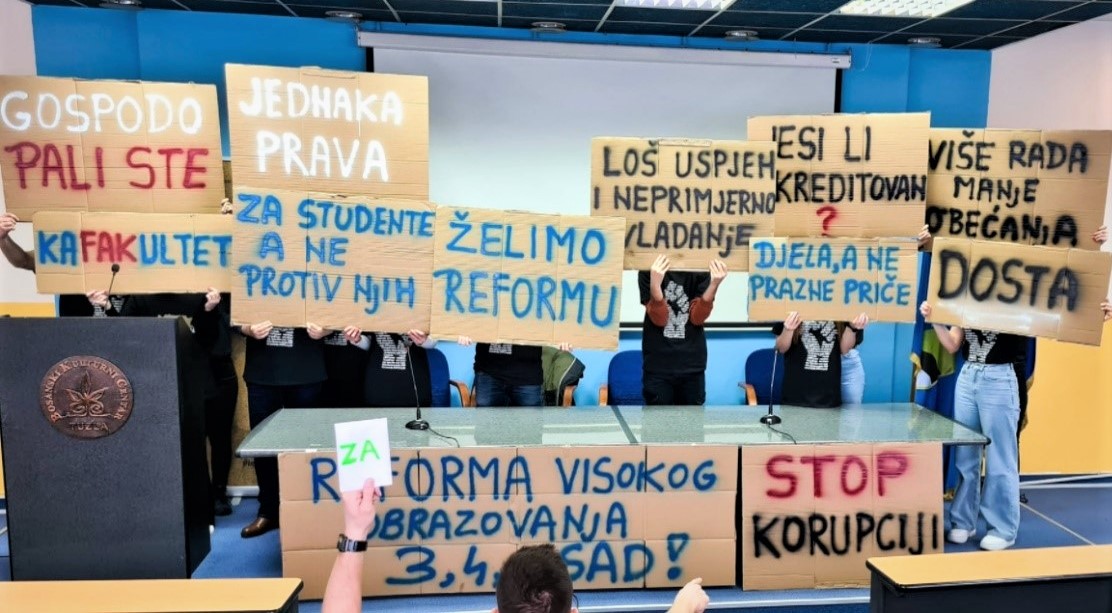 According to our information from the Ministry of Education of Tuzla Canton, after the last text of Inforadar and the reaction of the FUP and the seizure of documents for Kallos, the President of the Accreditation Commission Bernadin Ibrahimpašić resigned.