Alden Kajtaz, Secretary of the Federal Ministry of Education and Science, was hired for this position on the basis of forged competition documents. This fact, confirmed by the verdict of the court in Mostar, is not disputable to the FBIH Government, which after the departure of Elvira Dilberović as an ambassador to Sweden to the position of the first man of the institution crucial for coordination of education and verification of diplomas appoints Kajtaz.

The Federal Ministry of Education and Science is responsible for coordinating education in the FBIH as well as the diploma verification and verification process. In addition to these competencies, an institution with a budget of approx. 8 million KM within its competencies also manages the processes of financing grants for educational institutions as well as non-governmental organizations. The Mostar-based ministry, unfortunately, shares the fate of a number of other state institutions. Non-transparency in work as well as employment-based on party affiliation.

A striking example of party staffing in institutions is the process of hiring Alden Kajtaz in the Federal Ministry of Education and Science.

The well-established practice of appointing advisors, and after that announcing competitions in order to secure a job, was accepted by the former SDA minister, and now the BiH ambassador to Sweden, Elvira Dilberović.

After being appointed to the position of Minister of the Federal Ministry of Education and Science, Elvira Dilberović appointed her party colleague Alden Kajtaz as her advisor. Shortly after his appointment as an advisor, Kajtaz was formally employed in this ministry as a secretary.

In the final verdict of the Cantonal Court in Mostar, Semir Šejtanić, the director of the Mujaga Komadina primary school, was sentenced to probation of 10 months because he knowingly signed an official document with which he falsified data on Alden Kajtaz’s work experience and work as a mathematics and physics teacher in this elementary school. 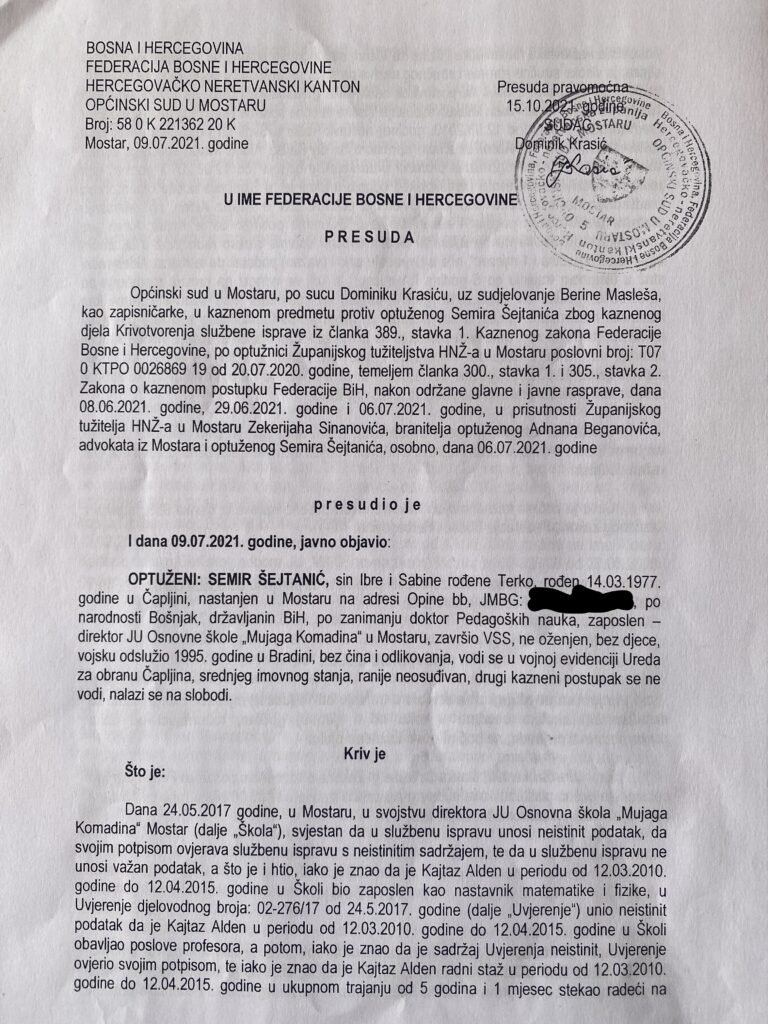 Verdict of the Municipal Court in Mostar / photo: Tačno.net

Based on this forged documentation, Alden Kajtaz applied for the position of secretary of the ministry. Another candidate for this position was lawyer Milenko Krčum, who is the person who filed a criminal complaint against Semir Šejtanić.

“I filed a criminal complaint against Samir Šejtanić, a member of the SDA City Board, who issued a certificate of work experience to his party colleague Alden Kajtaz, as the head of the educational institution, in which false information was given. According to that report, the Cantonal Prosecutor’s Office in Mostar conducted an investigation and filed an indictment, according to which the Municipal Court found Semir Šejtanić guilty. That verdict was confirmed by the Cantonal Court, which rejected Šejtanić’s appeal. “

Milenko Krčum also initiated a lawsuit before the competent court in Mostar, in which one of the lawsuits is that the competition in which Kajtaz won be annulled. Krčum also points out the absurdity of political trade and blatant violations of laws and regulations.

“Kajtaz was appointed by his party colleague from the SDA electoral list in the last elections, Minister Dr Elvira Dilberović. She then resigned, so the government, based on an unconstitutional agreement – political trade, authorized Kajtaz “to sign acts of the Federal Ministry of Education and Science.” By the way, by the agreement of the SDA and HDZ, contrary to the FBIH constitution, the SDA, with the consent of its coalition partners, holds departments without ministers in a way that turns civil servants into some kind of acting ministers. The purpose of this castling was for Kajtaz to become a “quasi-minister”. This practice violates the Constitution of the Federation. And they fill leading positions in the civil service and other public services on the basis of behind-the-scenes, and sometimes open trade between political parties. “ 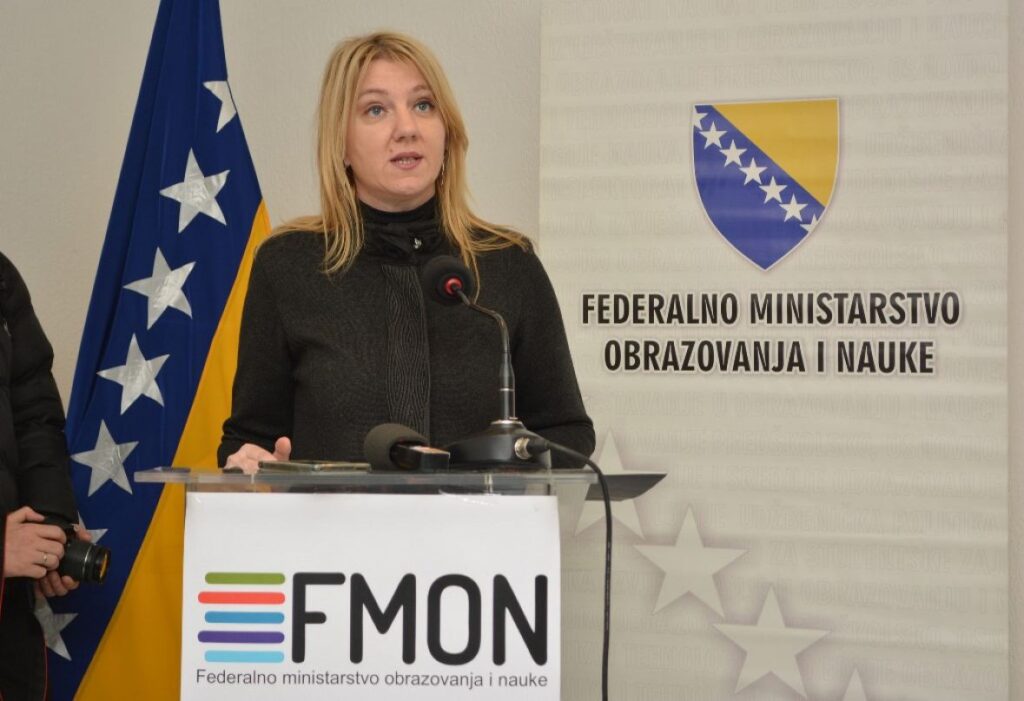 Former Minister, now Ambassador to Sweden Elvira Dilberović was not in the mood to talk about this topic. As she emphasized, she no longer has the right to comment on the events in the Federal Ministry of Education and Science.

Indicatively, after Alden Kajtaz was appointed Secretary of the Federal Ministry of Education and Science, his colleague who forged a certificate of work experience, Semir Šejtanić, was appointed President of the FBIH Student and Teacher Mobility Steering Committee within this ministry. 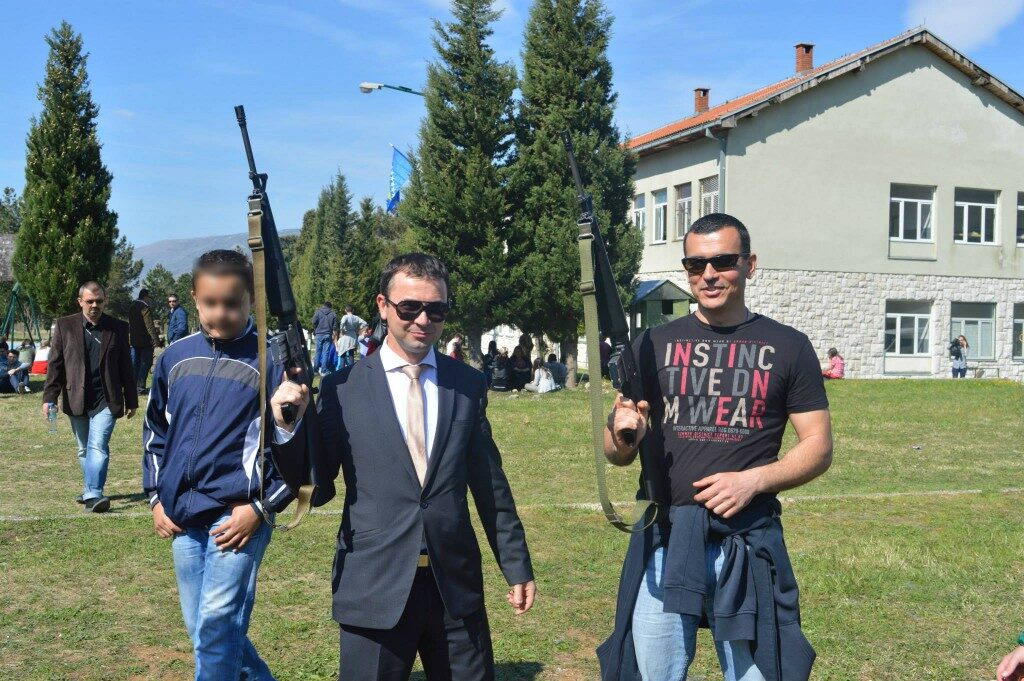 According to available data from 2015 to 2018 and the positioning of Kajtaz, the Federal Ministry of Education and Science paid a total of 22,436 KM for four projects to the account of the Mujaga Komadina primary school headed by Semir Šejtanić. Also, Šejtanić was directly funded by this ministry in the amount of 1,200 KM for the project “Communication in school – higher education textbook.”

There is no place for inspectors

At the end of February this year, with a new rulebook on job systematization, the Inspectorate, as an integral part of this ministry and a key instance for verifying the authenticity of all educational documents, was abolished.

According to Selim Husović, an inspector in this institution, the reasons should be sought in the act of revenge and disciplining him and his colleagues who pointed out irregularities and abuses in this ministry.

“The Inspectorate, as an integral part of this Ministry, functioned without any problems until the arrival of Minister Elvira Dilberović. In 2016, the Minister sent an inquiry to the FBIH Legislation Office only for the legality of the Inspectorate’s work. But if the work of the inspectorate is disputable, then the work of the entire ministry and all sectors is also disputable, considering that education and science in the FBIH are under the jurisdiction of the canton. However, in my opinion, behind this decision to abolish the Inspectorate lies discipline and revenge against me and my colleagues who for years have continuously pointed out illegalities in the work of the ministry and filed criminal charges. The HNK Prosecutor’s Office has never acted adequately or tried to shed light on the events in this ministry. “

We remind you that after the scandal about the purchase of diplomas and public pressure, the FBIH Government ordered the Federal Ministry of Education and Science to carry out the process of reviewing the diplomas of employees in the Federal institutions. According to Husović, the inspectors of this ministry were not involved in this process. 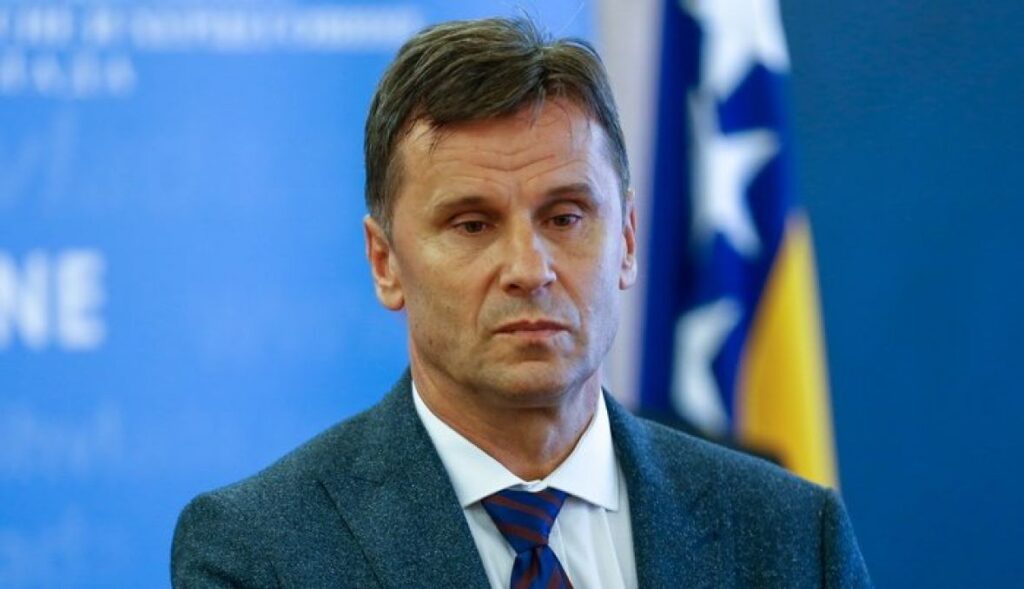 Selim Husović emphasizes that all competent institutions, the FBIH Government and Prime Minister Novalić, the FBIH Civil Service Agency as the Federal Inspectorate, warned about irregularities in the work and the fact that Alden Kajtaz is the head of the ministry, who is employed on the basis of forged documents.

“We addressed Prime Minister Novalić in a written act back in November last year and asked that Alden Kajtaz’s authority and stamp be taken away. There was no answer. We sent the same letter with the verdicts in February, we also addressed the Civil Service Agency and the FBIH Administrative Inspection. So Kajtaz was hired on the basis of forged documentation, which means that he should be held criminally liable, considering that he made illegal profits and damaged the FBIH budget. “

Only in BiH: Party above the law

From the FBIH Government, we received a short answer to our question on how they will react with regard to the final verdicts in the forgery of tender documents in the case of Alden Kajtaz, to the FBIH Civil Service Agency:

The FBIH Civil Service Agency states that the Law regulates the termination of employment of a civil servant due to “obtaining documents or statements during the procedure of submitting applications for admission to the civil service, which later turned out to be false.”

“Will he resign from his position within this ministry?” Was one of the questions we asked Mr Alden Kajtaz. We are still waiting for answers to the questions sent directly to Kajtaz and the Federal Ministry of Education and Science. 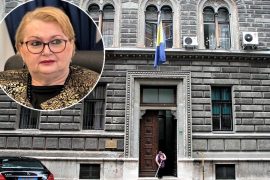 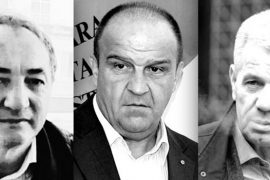