The current director of the Library for the Blind and Visually Impaired, who is already answering in court for a forged diploma, is being re-investigated by the KS Prosecutor’s Office, due to fictitious contracts and other illegalities. Pleh for Focus says: We do good, not crimes.

The Library for the Blind and Visually Impaired in Bosnia and Herzegovina, one of seven cultural institutions of national importance whose status has not been resolved to date, is currently in an even worse situation, not due to state negligence.

According to research conducted by Fokus.ba, this is exactly the situation that has been taken advantage of by the current director of the Library Sakib Pleh, a man who has been the head of this institution for more than 17 years with a false diploma, and who is currently responsible in the Sarajevo Municipal Court for that, ie for the criminal offense of “forgery of a document”. Namely, due to his (mis)deeds in the past years, about which there is extensive documentation, the employees of the Library have been fearing for their existence for years because every year, like these past years, they do not have a salary for several months.

It was founded back in 1972, and it has managed to maintain its continuity to this day. In 1995, before the Dayton Agreement, the Parliamentary Assembly of RBiH adopted the Law on the Library of RBiH, which is still in force today. But, along with six other institutions of national importance (the National Museum, the National Library, the National Gallery, the Cinematheque, the Historical Museum, and the Museum of Literature and Performing Arts), it remained, in terms of management and funding, neither in heaven nor on earth.

Before we substantiate the new findings on the irregularities alleged against Pleh with evidence, we will remind you of the information that the Fokus.ba portal was the first to publish in February last year about how the Anti-Corruption Office filed a criminal complaint with the KS Prosecutor’s Office after it was established that he had worked with a degree from the Faculty of Law in Titograd (Podgorica, Montenegro) dated 8 February 1986, which subsequent checks found to be unreliable. This resulted in the indictment of the KS Prosecutor’s Office, which was confirmed by the Court and the trial against Pleh is ongoing.

Samir Pleh in the library for the blind and visually impaired (Photo: Facebook)

Pleh handed over, in other words, used, that forged diploma, which is the centre of the indictment for which he is now answering in court, when he was appointed president of the School Board of the Public Institution Elementary School “Aneks” as a representative of the Ministry of Education, Science and Youth KS.

But that’s not all. As confirmed for Fokus.ba in the Office for the Fight against Corruption KS, concluding fictitious contracts all these years of managing the Library, then illegal activities outside the Board, and other irregularities in the institution whose unresolved status he took advantage of, are additional incriminations that are now reported to the KS Prosecutor’s Office.

KS Prosecutor’s Office spokeswoman Azra Bavčić confirmed for Fokus.ba that this judicial institution has formed a new case against Pleh and that the allegations in the report are being investigated.

Fokus.ba received extensive documentation on Pleh’s (mis)deeds, and the employees whose names we will protect also presented their confessions to us.

According to the information we received, Sakib Pleh passed the competition for director in 2004 without fulfilling any of the conditions of the competition. After his appointment, the Board of Directors of the Library never met again after 17 years.

The non-existence of the Pleh Board of Directors has not prevented him from making records from a non-existent Board of Directors session in recent years, for example, for donations (and there have been many in the past decade and a half) to “cover everything with papers”. Without the Management Board, he made the decision on the amount of his own salary, which amounts to 2,500 KM.

Recently, with the Foundation for Sustainable Development “Rijeka dobrote” (Translation: River of Goodness), which was entered in the register of foundations in May last year, Pleh launched an online library and so, according to employees, he began to “take out” the book fund from the institution and store it in this a foundation which, as they say, will ask for donations on the basis of audiobooks recorded in the Library.

It should be emphasized that books adapted for the blind are exempt from copyright under the Copyright Act, but only if they are used by blind people. This raises the question of who will use those books through the foundation.

Facsimile of the law establishing the disputed Department

Furthermore, the subject of the KS Prosecutor’s Office’s investigation is also the employment without competition of a secretary and a driver, as well as concluding a series of fictitious contracts where the names of the owners of a well-known Sarajevo restaurant and his relatives, former directors of the BH Post and the National Museum appear. They were regularly paid amounts of several thousand KM on the basis of cooperation from the Library’s account, about which there is an abundance of material evidence. Those associates who were paid high amounts for work contracts, the workers claim, never even showed up at the Library.

External associates are also inlaws, and family relations dictated the conclusion of cooperation with persons from the elementary school “Aneks”, where Pleh is the president of the School Board. Pleh also ensured that his and his driver’s mobile phone costs were paid with money from the Library’s account.

Furthermore, according to the report processed by the KS Prosecutor’s Office, in November 2018, Pleh’s official vehicle owned by the Library was stolen. He then claimed in a press statement that it was his car. However, Fokus.ba is in possession of documentation (decisions, record) which states that the Škoda Octavia vehicle, which Pleh claimed was stolen in 2018, was owned by the Library.

According to the employees, the vehicle was later removed from Library inventory, a new one was bought with the insurance money, and Pleh continued the practice of using the official car as if it were private.

The decision of the procurement of the Škoda

In a statement for Fokus, the Library workers point out that they do not receive their salaries for several months every year and take out loans in order to feed their families. Last year, the Library from various levels of government, as the workers point out, received about 250,000 KM, and they did not have enough for the salaries for the last three months in 2021.

– What hurts us the most is the fact that the authorities pay money, but that somehow every year we lack money for salaries. When former Minister Kenan Alikadić published information for the Library that he spends 40,000 KM a year on work contracts, we began to doubt. Last year, we monitored how much was paid to the Library from various levels of government, and according to our information, it was 250,000 KM, which was enough for salaries (12 months) and normal functioning with rational spending. However, due to fictitious employment contracts, enormous salaries of directors, two official cars, bills, and unnecessary business trips (in BiH and abroad) there is no money for salaries. The situation worsened even more when on December 31, five cultural institutions signed contracts with the Ministry of Culture and Sports of KS for additional funds, where our library should have received 30,000 KM. We found out that the problem with the project was that it was signed by Sakib Pleh, who does not want to authorize anyone else to represent the Library – the employees told us.

The decision to use a mobile phone

The Minister of Culture and Sports of KS, Samir Avdić, confirmed for Fokus.ba that they did not receive these funds precisely because of Pleh and his status.

– When it comes to the person responsible for the Library, we received restrictions, among other things, information from the Office for the Fight against Corruption and additional information about the director, as well as the fact that the director is on the bench. Because of all this, I made the decision not to allocate funds to the Library. Signing contracts and creating an obligation with a person who has such a background is completely irresponsible. I suggested to the employees to ask the director to authorize a responsible person who will represent the Library, whether through a court or some other instance. That is the only right way. Everything else is improper gymnastics – Avdić told us.

We wanted to hear the opinion of Pleh aboutall this. When we contacted him, he initially did not want to give a statement. As the conversation went on, he said the following:

– Everything that is with judicial institutions, I answer only there.

After we confronted him with the information that the KS Prosecutor’s Office is checking in the case in order to make an appropriate decision, Pleh briefly commented on that.

– These are not fictitious contracts, I had a budget inspection these days and I know that it is not, so there is no need for that… And in regards to the management boards… Theres nothing… You should know that the Library has not resolved its legal status. That is a finished story. I don’t want anything on that topic. It is a matter of the state. I don’t care. Opening protruding wards… It’s all nothing. So, it’s all in accordance with the rules. Protruding wards are opening where there are a large number of blind people. We do good, good deeds, not crimes as someone from the Office of Anti-Corruption wants to portray. There was an inspection, they said everything was fine. That is not my problem, it is theirs, let them prove it in court. Thank you and goodbye – said Pleh. 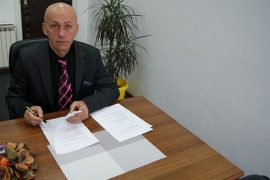