Employees of the Center for Vocational Rehabilitation and Employment of the Disabled a.d. Banja Luka rejected all claims of acting director Željko Ubiparip that their salaries, although broken down into instalments, were regular, as well as that there was no mobbing, physical violence or illegal actions and that he is more than accommodating to them.

According to the representatives of the Center’s trade union organization, reacting to Ubiparip’s statement for eTrafika, his “mildness” is evidenced by the situation in which he visibly drunk slapped a war invalid amputee, which was witnessed by workers and why the police intervened.

“The acting director claims that there is no talk of physical and verbal violence and that he regrets being accommodating. However, workers know that the truth is different. We witnessed his physical confrontation when he slapped a war invalid amputee. There is also a record because the police intervened. Perhaps this omission could also be characterized as a product of excessive alcohol consumption. However, verbal attacks and swearing are much more frequent, and there are also recordings of insults to workers by the acting director”, claim the trade unions.

The eTrafika tried to verify the allegations about the physical attack by the Banja Luka police. However, we have not received a response until the conclusion of this text, and we will publish it later.

The union representative Miroslav Gnjatović says that salaries in the Center are not regular and that four were late until the story of the strike began when three and a half backed wages were paid quickly.

“At that time, the Ministry of Labor and Veterans’ Disability Protection paid us 90,000 KM as assistance for the end of the fiscal year and the purchase of raw materials. The statement that, although in quarters, we still get the full salary during the month, is completely incorrect, because if we had received them, four of them would not be late. There were months when we only got one quarter each. We suffered, we had sympathy. We were severely hurt by the knowledge and recognition that his close associates regularly receive full salaries. They are privileged in various ways, some so much so that they have a separate entrance to the building so that it is not visible when they come and go, while some have every minute taken into account. The same people receive high bonuses every month, while for other workers, who are in debt, there is work, but not earnings “, he says.

The trade unions say that the director sometimes punishes them by deducting five and ten per cent from their salary and that he denies them the payment of transportation every year for at least one month. Workers’ representatives say the director is using various illegalities and have provided written evidence for many of them, such as income and expenditure tables, fuel consumption, and controversial parallel regulations on noise management, which they have adjusted at their own discretion.

“The acting director states that there is no offence attributable to him. Here is one: The debt to the Solidarity Fund amounts to 11,083 KM, which were duly taken from the workers’ salaries but were not paid to the Fund. Where did that money, duly deducted from the workers’ salaries, go? Here is another: The centre spends from 8,000 KM to 9,000 KM on a monthly basis on fuel costs. Why so much? We ask the inspection to do its job and to check the truth of our allegations in detail”, say the trade unions.

However, they still claim that they have nothing personal against Ubiparip, but that they will not go beyond the unscrupulous management of the Center.

“It is important to emphasize that we really have nothing personal against the acting director, but we have against the inhumane and discriminatory way of working for him and his associates. The pensioner mentioned by the acting director gathered the courage to clearly say what he knows. In front of all the workers, he talked about embezzlement regarding the purchase of machines and equipment, business and theft of money. The acting director makes contradictory statements stating that one salary was given by the Ministry, and we earned three from production, and immediately after that, he says that the debt is increasing due to insufficient workload. Who’s lying here? How can we earn three salaries in one month, with an insufficient workload? Although the acting director mentions that the Center has no room for new workers, he recently hired two brothers of the head of the commercial department, the daughter of the head of accounting and another woman whose parents have a very developed private business. So, four healthy workers without qualifications and education are now in jobs that require other qualifications in the overbooked Center”, the trade unions pointed out.

The workers say that the retirement of seven workers is still unclear because the lawyer claims that there is no money for their contributions and that the company’s account is completely empty, although the Ministry paid 142,000 KM for these purposes. Three pensioners left, and no one knows what happened to the other four and what happened to the money.

“The acting director himself confirmed and acknowledged that there are two rules of procedure, and for the second he says that there is no date and that there are small and negligible changes. It is true that these same regulations have the same protocol number, date, stamp and even the same grammatical errors, which indicates individual changes to the same document. It is also true that a significant number of articles of the rulebook have been substantially changed and that certain provisions have been changed on their own initiative in accordance with the situation in which the acting director had a desire to punish certain workers and enforce his arbitrariness. The Ministry told us that such a change in the rulebook is a significant criminal offence that should be addressed by the Prosecutor’s Office. As the director is responsible for controlling the funds, as well as the Supervisory Board, whose composition suits him best, because the president is the husband of his wife’s sister, and the remaining members are not there at all, it is clear that he is not serving anything,” they say. 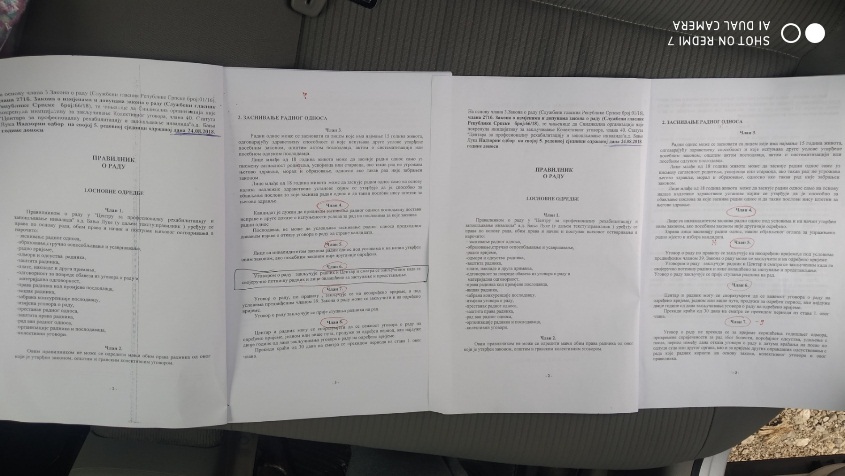 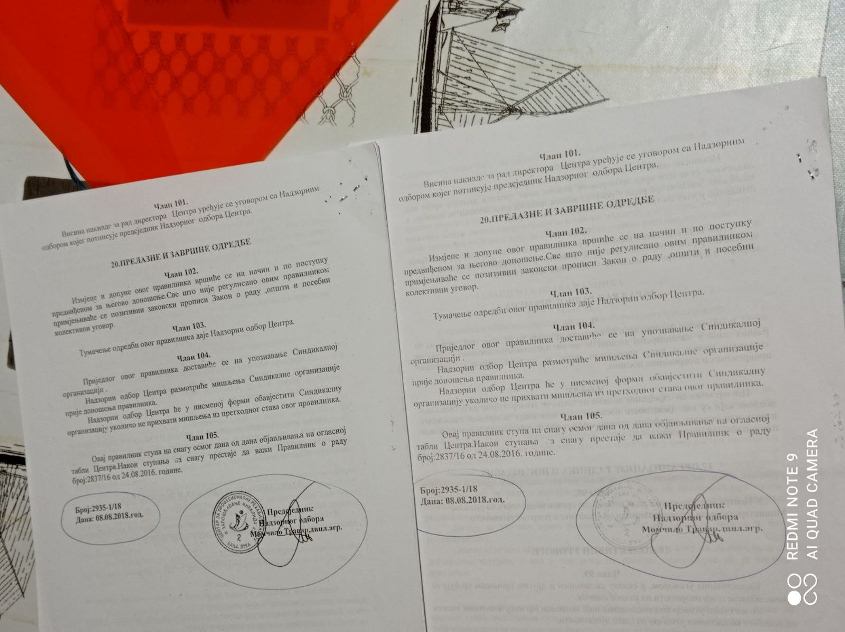 The union organization of the Center organized a one-hour warning strike in the Center on Tuesday, January 25, in order to point out the existing problems and try to protect professional, economic, social and labour rights. On January 11 this year, the inspection determined that the salaries for October and November 2021 were not paid, and it was ordered that they be paid. The trade unions claim that the inspection did not perform its tasks professionally and conscientiously, so doubts were expressed about their impartiality.

We remind you that Željko Ubiparip, the director of the Center, told eTrafika that the accusations of workers and union representatives were unfounded, and that it was not at all clear to him why they scheduled a strike when all their salaries were paid. He said that there was no talk of physical and verbal assault on the workers, but that he regretted it because he was so kind to them.

“Let them find only one crime as an example, what I did and when I attacked. I have been up there for seven years and now, right at the moment when I have Covid, when I have problems and when the Government of Srpska is helping us and going out of their way to help us, they are starting a strike. All this is led by one of the former workers, now a pensioner, who wants to continue working under a work contract, and another who asked me to hire his sister. I told both of them that I can’t do that because we are overbooked and in these conditions, there is no room for new people “, said Ubiparip for eTrafika. 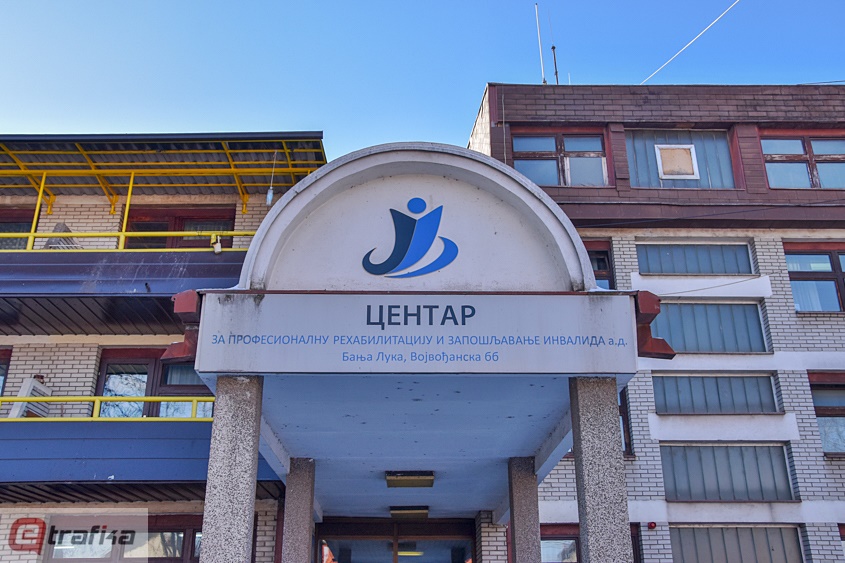 The director of the Center confirmed then that he pays salaries in quarters, and as an explanation for that, he offered the fact that account blockades happen very often due to accumulated debts. He also confirmed that there are two work regulations.

“It is true that the salary is in quarters, but only because I can’t wait for a small blockade of our accounts, leaving everyone without a salary. However, during the month, everyone gets a full salary. I went out to meet them maybe more than I should and feel free to say so. Whenever they came to a state of need or had a problem, I also paid in advance to help them. If that’s a sin, so be it. To those who have big loans and who have to service them regularly, I have always helped because it is human, but it is not clear to me where the story of mobbing and assault came from today, and not in the previous seven years. It is not characteristic of me, as a human being, to attack anyone. Even the inspection last time they were surprised by the allegations of the report because there are no arguments”, claims Ubiparip.

Ubiparip confirmed the existence of two work regulations adopted in the same year, and for the latter, he says that there is no date and that there are such small and negligible changes.

Today, the debts of the Center amount to around three million KM, which seriously endangers its further work. According to the suppliers, the debts increased to 800,000 KM, of which 620,000 KM are for electricity, which is why a reprogram was signed whose monthly instalment amounts to 4,191.95 KM. Debt to the ITA BiH amounts to 6,580 KM, to the Tax Administration of the RS over 2.2 million KM, etc. Debts also existed to workers, but were recently settled.

The centre is in severe debt, workers accuse the director of threats and embezzlement 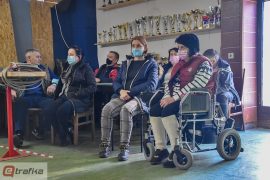 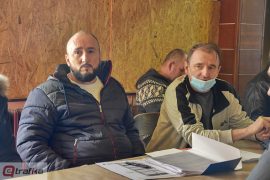