The investment assessment report for SHPP “Podivič” was prepared by Olivera Elez, a permanent court expert in the construction profession, who is also part of the ownership structure of the company “SIMING Trade” Ltd., the contractor, but also the site manager.

On September 28, 2017, the Energy Regulatory Commission of Republika Srpska received a request from the company “BUK” Ltd. East Sarajevo to extend the preliminary right to encourage electricity production at SHPP “Podivic” on Kasindolska River in the municipality of Trnovo for an additional six months.

In the submitted report, nothing would have been disputable if the Investment Assessment Report for SHPP “Podivič” had not been prepared by Olivera Elez, a permanent court expert in the field of construction. Olivera is also a co-owner of the company “SIMING Trade” Ltd. Foča, which is entrusted with the construction of this mini-hydropower plant.

Despite the fact that the court expert could have benefited the investor who hired her company with the investment assessment report, RERS issued, in December of the same year, a Decision extending the preliminary right to incentives.

The Association for the Fight against Corruption “Transparency International BiH” points out that conflict of interest is an area that is completely unregulated in our legislation. A number of laws and bylaws that should prevent and sanction potential conflicts of interest are deficient or not enacted at all. It is precisely such shortcomings that lead to frequent occurrences that are essentially conflicts of interest, but formally and legally they are not.

“In the field of expertise, these provisions are almost non-existent, however, according to the law, experts must be independent and autonomous in performing expertise. The body conducting the procedure should inform the competent ministry about all possible irregularities and propose the determination of the expert’s responsibility, or at the proposal of the party, and that in cases of unprofessional, unscrupulous and independent work certain warnings or other measures be issued”, Damjan Ožegović, senior researcher and a legal associate at Transparency, told SPIN Info.

The decision of the Energy Regulatory Commission is valid, although it can be challenged before other competent authorities. On the other hand, the association states that previous decisions of the competent authorities have rarely identified existing conflicts of interest and that they have always been sympathetic to offenders whom the applicants consider to be in conflict of interest, unless the relevant law or bylaws explicitly and unequivocally do not regulate the existing situation.

The current director of SIMING Trade Ltd., Mladen Elez, does not see anything disputable in the fact that Olivera Elez performed the role of a court expert and was also a part of the ownership structure of the contractor’s company.

“Olivera Elez did prepare the report, but the client is the investor, ie ‘Buk Ltd.’, so Olivera Elez is not in any conflict of interest, it is not ‘SIMING Trade’ owned by the party in the procedure, but the investor proves to the Regulatory Agency part of the work“, States Mladen Elez in a statement for our portal and confirms that his mother, in addition to everything, performed the function of the head of the construction site during the works on the construction of SHPPs.

Apart from the fact that the lack of conflict of interest enabled the development of family affairs, numerous irregularities were noticed during the construction of SHPP, which is why the informal group of citizens “STOP izgradnji mHE na Kasindolskoj rijeci” (translation: STOP construction of SHPP on Kasindolska river) often asked additional institutions for additional inspection findings.

“In 2017, a group of citizens sent letters to the competent inspectors, the mayor of Trnovo and the competent ministry during the first works on the first built SHPP ‘Podivič’. These letters list numerous irregularities that citizens noticed, and then, after the inspection, the Republic Urban Planning and Construction Inspector in 2017 banned further works and construction of the SHPP ‘Podivič’, until certain shortcomings are eliminated. One of the identified shortcomings is the lack of a building permit, ie the possession of a temporary construction permit. Also, it was determined that concrete of inadequate quality was used, but also other irregularities“, states Sara Tuševljak, a member of the informal group of citizens “STOP izgradnji mHE na Kasindolskoj rijeci” (STOP the construction of SHPP on Kasindolska river).

In addition, instead of one of the projected bridges, three concrete pipes were installed on the river, which posed a potential danger to downstream settlements, as well as to the PHI Hospital “Srbija”. In November 2021, these warnings came true. The Kasindolska River overflowed during the flood, and at the critical point of the “Srbija” Hospital, the shoreline collapsed on the road between the Covid department and the main building of the Hospital.

“Due to the announcement of heavy rainfall on November 8, 2021, the Commander of the Staff, in cooperation with the Municipal Civil Protection, redirected all available mechanization to critical points from the ‘Covid-Lung’ department of the ‘Srbija’ Hospital to Vasilja Grđića Street in Donji Kotorac. The plan was to clear the Kasindolska riverbed of all barriers and obstacles that had appeared in the watercourse in the previous days. The goal was to prevent greater damage to the population and the municipality,” it is stated in the Information on floods compiled by the Municipality of Istočna Ilidža.

The damage from the floods in this municipality is estimated at over 3.5 million KM.

As the head of the construction site, but also the co-owner of the contractor’s company, Olivera Elez had the responsibility to control the quality of the work and the implementation of laws, regulations and protection measures.

Article 139, paragraph 6, of the RS Law on Planning and Physical Construction states: “If the contractor during the inspection of the confirmed main project finds such errors that would endanger the safety of the facility, human life and health, traffic, neighbouring facilities or the environment, and the investor or designer does not eliminate errors despite warnings, the contractor is obliged to report such errors to the urban-construction inspection and suspend the works until the final decision“.

The company “SIMING Trade” Ltd., owned by the Elez family, is the investor and contractor of numerous small hydropower plants in Republika Srpska. Among them are SHPP “Krupica”, SHPP “Oteša”, SHPP “Gradac”, all in the municipality of Foča, SHPP “Jabuka” and many others. Many of them are being built together with the company “Bičakčić” Ltd. owned by Edhem Bičakčić, former Prime Minister of the Federation of BiH, longtime director of JP Elektroprivreda BiH during whose mandate the construction of SHPPs becomes one of the priorities of Elektroprivreda.

The fight for concessions for small hydropower plants has been going on since 2008, when Olivera Elez performed the function of the head of the Department of Urbanism in the municipality of Foča. Despite the fact that in 2004 the company “Eling inžinjering” from Teslić received a decision from the RS Concessions Commission, and later signed an agreement with the RS Government on the construction of three SHPPs on the Govza River, the owner Dragoljub Malić unsuccessfully addressed the municipality of Foča for four years, requesting the issuance of an urban permit for the construction of SHPPs. Olivera Elez explained the rejection of the request for the issuance of urban consent by the non-existence of these small hydropower plants in the Spatial Plan of RS, although there is a legal possibility that urban consent can be issued outside urban areas. However, ‘Siming Trade’ was also interested in this business at the same time. Again, the Elez family saw nothing questionable in that.

Olivera Elez, a member of the NDP, is currently the head of the Department of Economy and Social Affairs of the Municipality of Foča. 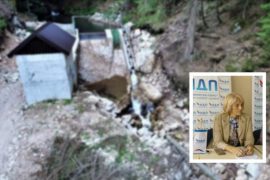