The Municipality of Nevesinje is spending more than a million KM on the second reconstruction of the House of Culture in the past three years. Public funds, including donations from Serbia, are spent non-transparently and without much benefit to the citizens of this poor municipality. Only favored private companies that regularly get lucrative jobs through dubious public procurement procedures have reason to be pleased.

Whether the works on the reconstruction or construction of a facility financed by the local authority will be awarded to “Aurora” doo or the company “MDM” is the basic question of public procurement of works in Nevesinje. “MDM” doo is owned by the family of the former deputy mayor, and now the acting head of the economy department Milutin Samardžić. The official owner is his father Veljko Samardžić.

The fact that he assigns too expensive jobs to the company of his associate is not a problem for the mayor, Milenko Avdalović, because no one has cared about a possible conflict of interest here for a long time.

If Samardžić’s “MDM” does not get the job, then “Aurora” will, owned by Milorad Jeremić, whose closeness to the current local government has never been questionable. Numerous public procurements testify to it, in which an enormous number was realized through direct agreements. In just one year, this company has concluded more than twenty direct agreements with the municipality.


The House of Culture “Nebojša Glogovac” was ceremoniously opened on November 8, 2018, after the reconstruction in which over half a million KM were spent. At the opening ceremony, it was pointed out that 300 thousand KM were provided from the aid paid to this municipality by the Government of Serbia, and the rest from the municipal budget.

Only two bids were received in the tender for the selection of the most favorable bidder for this job. They chose between Samardžić’s “MDM” and the consortium “Aurora – Nevesinje putevi”. The “lowest bid price” was used as a criterion for selecting the most favorable bidder, so the job went to “MDM”, which asked for 440,573.87, excluding VAT. The offer of the competition was about five thousand KM higher. 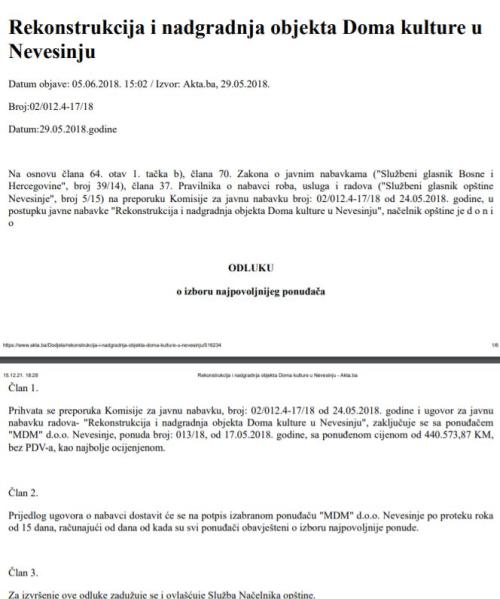 “Residents of Nevesinje are extremely happy to have received such a facility, which will receive new content with the help of the music school, ‘Prosvjeta’ and other cultural societies,” said Mayor Milenko Avdalović at the opening ceremony of the reconstructed facility. Even happier was his deputy, whose family business did this lucrative business.

Less than three years later, the municipal government came up with a “new idea” – the House of Culture needs to be reconstructed so that the gallery from the ground floor can be moved to the first floor, while the current space of the gallery will house the Memorial Room. For that, comprehensive construction works are necessary, as well as the replacement of the complete roof of the recently reconstructed House of Culture and the reconstruction of the facade.

“MDM” and “Aurora” applied for the tender again. This time, Jeremić’s “Aurora” got the job. According to the criterion “lowest bid price”, the accepted bid of this bidder weighing 445,119.10 KM (excluding VAT).

“MDM” asked for as much as 45 thousand more for this job, so there was no dilemma.

The funds, again, for the most part, as Mayor Avdalović emphasized, were provided from a donation from the Government of Serbia. In this round of aid to municipalities in the Republika Srpska, Nevesinje received about 1.3 million KM from Serbia. The Municipality of Nevesinje decides on the use of funds, and the reconstruction of the House of Culture, according to the municipal authorities, seems to be “a priority”. 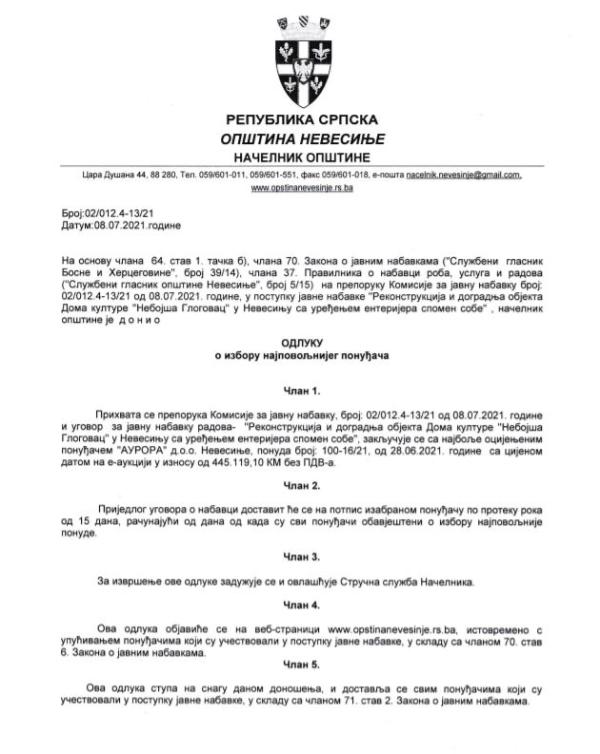 The question of why the relocation of the memorial room was not planned during the first reconstruction of this building, which would significantly reduce costs, remains unanswered. However, if all the work was done at once, then both favorites of Nevesinje’s public procurement would not be satisfied.

But even after the second reconstruction of the House of Culture, “MDM” did not “remain short-sleeved”. 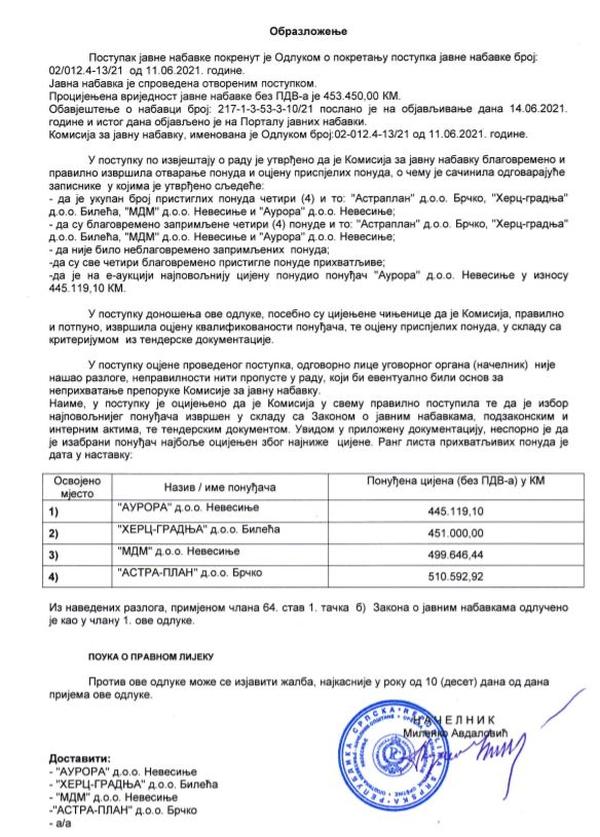 A tender has been announced for “remodeling, reconstruction, and upgrade of school and preschool education facilities”. This time, MDM’s offer of 224,700 KM (excluding VAT) was accepted.

Another bidder, Astra Plan from Brčko, asked for 300 KM more for the same job.

“Astra plan” appeared as a bidder in several tenders announced by the Municipality of Nevesinje. They did not get a job, but they had a great impact on raising the prices of works in situations where the “e-auction” method was used, as in this case.

The decision to assign the job to “MDM” was signed by the mayor on September 1 this year. 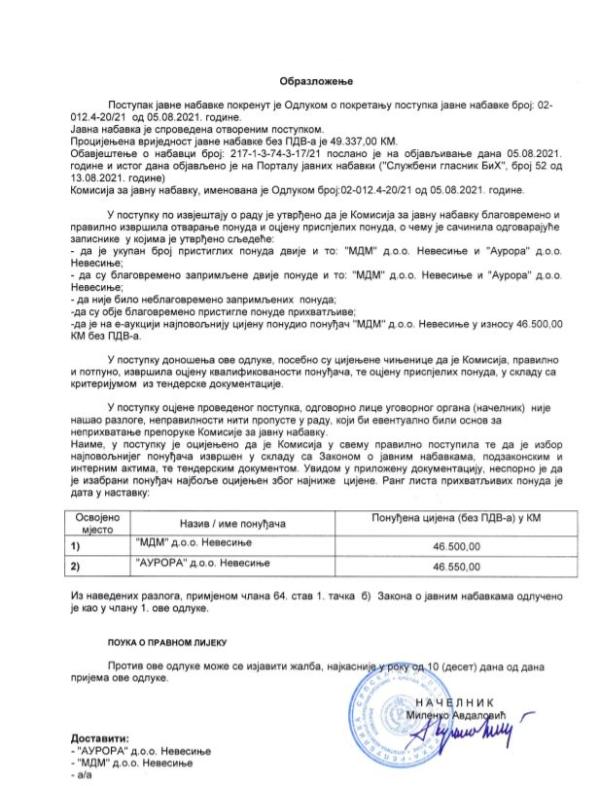 Only a day earlier, he signed a decision by which this company was awarded the job of “increasing energy efficiency” of the facility in which Radio Nevesinje, FC “Velež” and the Association “Moja Nada” are located.

Only the bids of “Aurora” and “MDM” were again submitted to the tender for the selection of the most favorable bidder.

The offer of Samardžić’s company of 46,500 KM was accepted, because “Aurora” asked for around fifty KM more for the same job.

Collusion or “We will come to an agreement”

Incredibly small differences in the offered prices do not surprise anyone. Coincidence, or metaphorically speaking, “as if they had agreed.”

The phenomenon of bidders agreeing on bids in a tender, in which the contracting authority itself usually participates, is called “collusion”.

This type of manipulation is also pointed out in organizations that are actively involved in public procurement procedures in BiH.

“In our market, it is a specific phenomenon, in which the contracting authority is most often involved. The bidders divide the works so that one participates in one public procurement procedure, the other in another and there is no price reduction. So, there is no healthy competition that would enable us to get the best quality goods, works or services for the least money. The consequence of that is that we get the most expensive procurements and they are usually not the highest quality goods, works or services “, says Damjan Ožegović from Transparency International BiH.

Another “weak point” of the public procurement system is, as indicated in this organization, the situation when the “lowest” price is used as a criterion for selecting the most favorable bid. This actually opens up space for collusion and other malversations.

Direct agreements of up to 6,000 KM are just “slippery ground” on which these procedures are often found.

In the last year alone, the Municipality of Nevesinje has signed 20 direct agreements with “Aurora” (without announcing a tender), the values of which range from 18 to 5,994 KMweighs.

This company also got the job of procuring materials for the construction of a water supply network for the village of Bežđeđe worth 79,588.79 KM. The contract was concluded on April 26, 2021, although the location conditions for this project were issued only a few months later, only on September 27, 2021.

For the favorites in the tenders of the municipality of Nevesinje, the rules obviously do not apply. 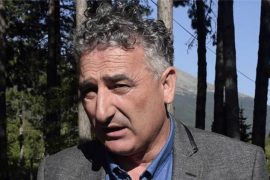 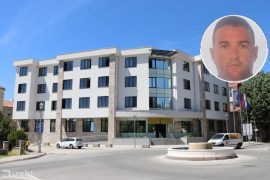 While the court deliberates, its twice-convicted official is still at work