HP Investing has received almost 70 million marks from the City of Mostar in the last 14 years, since according to the public procurement portal, business cooperation dates back, for the execution of construction works in the area of the City of Mostar.

Find someone who will look at you like the City of Mostar looks at HP Investing.

The data do not have to be accurate, but they can only be higher as there is no written value of awarded contracts for some published tenders. In the last two years alone, according to published public procurements, HP Investing has received over 16 million KM from the City, and the company has won over 100 tenders since 2007, according to the aforementioned data.

HP Investing – present on the streets of Mostar almost like Austro-Hungary.

The official website states that HP Investing doo Mostar is the business, legal and ownership successor of SZR “Građevina” Mostar, which was founded in 1980. However, this HP Investing as we see it today on the streets of Mostar and Herzegovina has been on the market since 1995, and the compan’s main activity is the construction and reconstruction of transport infrastructure facilities.

The mentioned company has been working and reconstructing the streets and facilities of Mostar for almost as long as the Austro-Hungarian government, which was present from 1878 to 1914 (unofficially until 1918 and the end of the war), but if we take into account the fact that HP Investing is the legal successor of Mostar Builders, then they are present longer than the Monarchy, and the only difference is that it seems that the love between the City of Mostar and HP Investing has no expiration date. In order to fully unite the building spirits of the former and current visual rulers of the city on Neretva, this Mostar company worked, among other things, on the reconstruction of the City Hall, which was originally built in 1900.

Pekusic’s entrepreneurship is closely linked to politics. It is a public secret that he is close to the SDA, and his friendship with Salem Marić, the president of the Mostar SDA and the president of the City Council of the City of Mostar, is also known. It is not bad to mention that Salem Marić was treated to a cottage in Podveležje, which was built parallel to the wind farms in Podveležje, and which he says is a tiny house. You guessed it, the contractor for the reconstruction of the local road was a consortium of HP Investing and Amite, so the road to Salem’s cottage in Podveležje is better today than the one on the Avenue.

You will rarely see someone publicly praising entrepreneurs, but Salem Marić did not hesitate. Due to his acquaintance and merits, in the pre-election confrontation with SDP’s Arman Zalihić, the head of the Mostar SDA publicly expressed his happiness and satisfaction that these construction companies are operating in the city. “People always equalize, I am overjoyed to have HP Investing, Amite …” Marić said at the
time.

The SDA-led coalition for Mostar has stormed the position of government in a city that has not had democratic elections in years. They got the result they got, but no funds were chosen in the election campaign. Hase Pekušić’s address appeared in the magazine STAV, which regularly propagates the views directed in the SDA

kitchen. In a special issue that came out about 10 days before the elections, part of this cry of heavy artillery was a Mostar entrepreneur who found himself in the company of names like Zlatko Guzina (SDA), untried mayor of Mostar, Salem Marić (SDA), Ahmed Džubur (Coalition for Mostar), Safo Oručević, Hamdija Jahić, Sergij Šotrić (Coalition for Mostar), Haris Šabanović (SDA) and others who (indirectly) supported the SDA coalition on the cover of the election slogan “Everything for Mostar”

The trust of the long-standing coalition partners HDZ and SDA are inviolable. The ultimate blank trust has been maintained for years through personnel policy, but also tender documents that are destined for the same companies. The audio recording that leaked before the elections shows the correspondence between Salem Marić and Ljubo Bešlić (former mayor of Mostar) in which Bešlić takes good care of his partners. “It is my choice. So the law says. But, due to the correctness of the relationship with the SDA, I did not want it in any other way. And I didn’t argue at all. I called Salem (op. Cit. Salem Marić). Salem, whoever you say is my choice, for the first people of any SDA institution. And I’m just a signatory. That’s how I set things up. I don’t want to argue. And if Marić proposes you, you will be!”

Citizens dissatisfied, the City does not care, HP Investing satisfied.

No one walked the streets of Mostar without commenting on them. The old and destroyed roads have been the subject of discussion and complaints for a reason, and the new ones offer a surprise every now and then. Poor infrastructure of the city’s main roads has led to the satisfaction of citizens if the street does not have to be re-asphalted, and there are often scenes of raising newly re-asphalted sections or re-work on parts where all traffic signals have been done.

The asphalting of the manholes on the newly renovated road in the Mostar settlement of Balinovac certainly belongs to the section of believe it or not, and after the clumsy asphalting, the road is properly signalled. The contractor was HP Investing, and the supervision was done by the Sarajevo IPSA Institute, which did not answer whether they received complaints from citizens or the City of Mostar for the work done.

“The contract on the Reconstruction of the main road M17.4 of the section Kralja Tomislava Street envisages the installation of a wearing layer of asphalt mixture SMA 16 (silicate aggregate) 4 cm thick. This design is done on all main roads. This is different from the previous types of final (wearing) layer in the City of Mostar, so it is a bit unusual for drivers. This type of asphalt is of better quality and is longer lasting. The works were performed neatly and in accordance to the rules of the profession and recommendations for this type of work &quot;, he stated for our portal.

Not everyone is of that opinion. His vision was given to us by a civil engineer who has many years of experience in the construction of highways.

“SMA 16 is most often used when making one layer of asphalt, and when there are several layers, then the wear should be SMA 11. SMA mixture is good, it is a new thing and it has only been installed in our country for a few years, but it is more accurate to install SMA 11. This means that the largest grain of the fraction or aggregate in the mixture is 11 mm, in their case, it is 16 mm. It is not used on all highways as you stated, for example, Hering does SMA 11, Brina on Vranić the same, and Grude uses the same for highways”, claims our interlocutor.

And with the arrival of the “;new government”, in which Pekušić’s friend Salem Marić remains, HP Investing continues with works in the area of the City of Mostar, which has entrusted him with over 4.5 million KM since February this year. 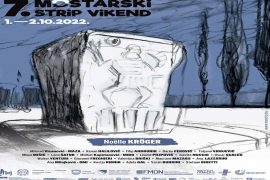 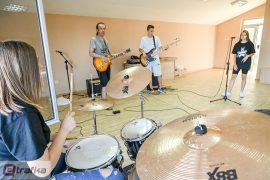 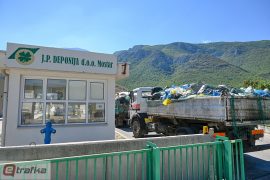