Đajić Bogosav, brother of the president of the Banja Luka SNSD Vlado Đajić, concluded a contract for the sale of real estate (it was a plot of land) in Banja Luka in the neighbourhood of Ada, katastarska čestica k.č. 487/1 and buys landmarked as a garden and registered in the title deed 1405 KO Banja Luka.

The mentioned real estate was sold for 200,000 new dinars on February 5, 1998, in Banja Luka, and the seller was Pavlović Vojislav, from the Banja Luka neighbourhood Ada. 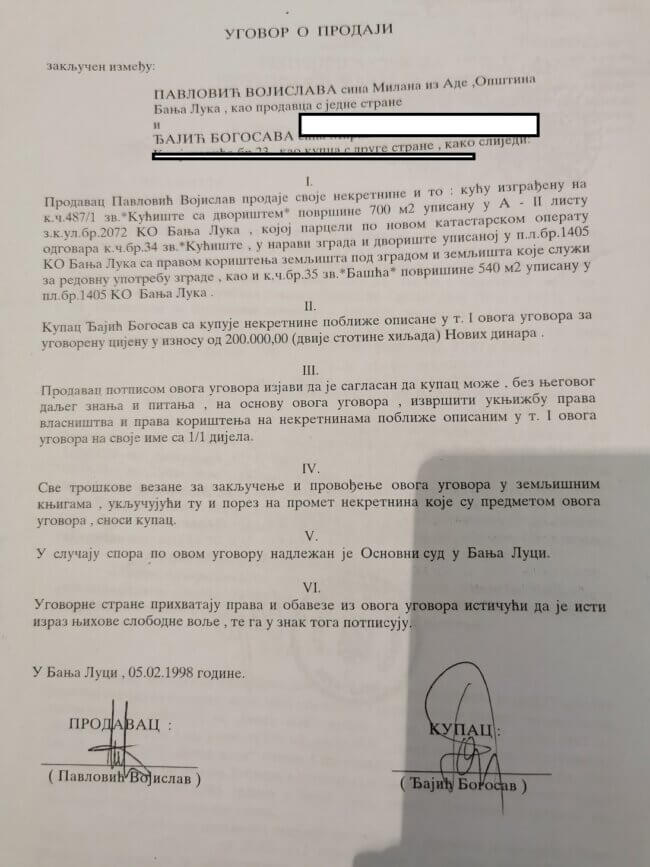 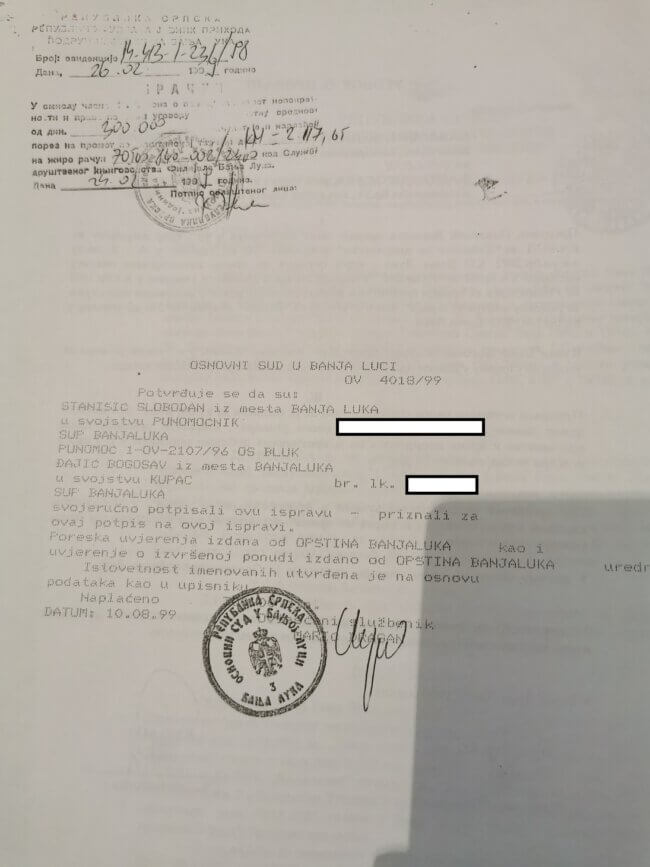 Certification of the same contract in the Basic Court in Banja Luka on February 24, 1999.

It is interesting that Vojislav Pavlović moved to Australia in 1991, and the mentioned contract was certified in the Basic Court in Banja Luka under number 14-133-122 / 98.

On the basis of that contract, Bogosav addresses RUGIP, more precisely Dragan Grulović, who makes a decision on the basis of the contract of sale. During the decision, Grulović stated that Vojislav Pavlović sold the said real estate to Đajić on May 15, 1985. However, during the issuance of the title deed and the land registry entry on September 26, 2017, the Banja Luka regional unit states that the said land is public property. – title deed 1405 and land book.

After he was registered in the land books as the owner of socially-owned land, Đajić Bogosav, on the basis of, as our source explains, falsified documentation on September 27, 2010, the same land was sold to Radoslav Šebić for 40,000 KM, but he avoided transferring ownership, presumably because he knew that the sale documentation had been falsified.

In 2017, Đajić managed to register as 1/1 owner of the plot, and in that he was “helped” by the head of the RUGIP regional unit, Dragan Grulović. 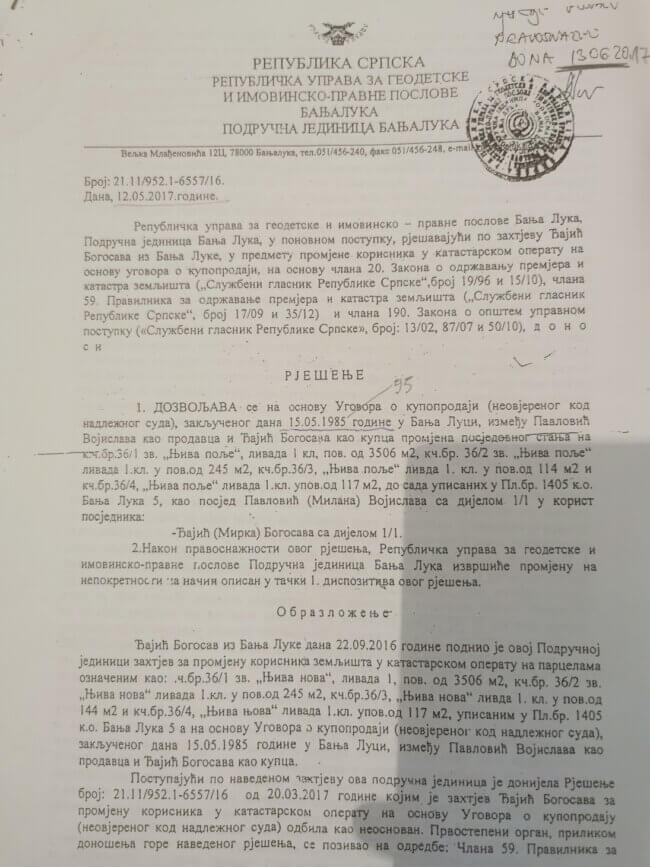 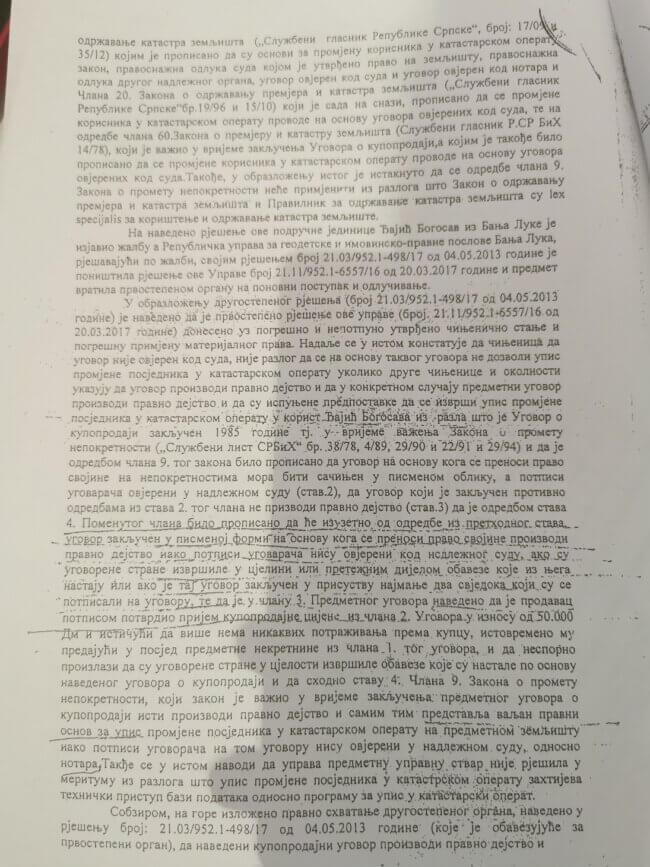 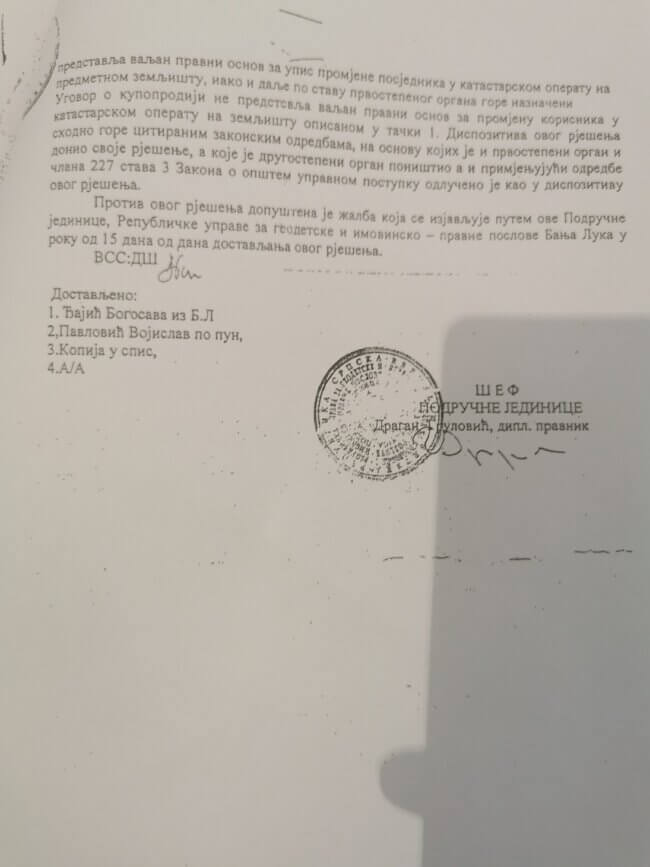 After that, he hired a lawyer, Rajka Savić from Banja Luka, to help him carry out a new real estate transaction, which Savić did, making a contract that the said real estate was bought by her brother Branko Savić, for the amount of 50,000 KM.

The contract was made in 2017, and at the time of concluding the contract, the market value of the land was 300 KM per square meter, ie the complete plot of nearly 4 dunams was valued at over one million KM. At that time, a regulatory plan was in force, which provided for the construction of a primary school in the neighbourhood Ada on the said plot. The proof that the sales contract between Đajić the seller and Savić the buyer is fictitious is that the real estate transfer tax was never paid, and the contract was not even certified, which damaged both Đajić and Savić’s national budget.

On the basis of a notary document made in the notary office of Milenko Delić, the ownership of the real estate was transferred from Đajic Bogosava to Savić Branko, due to, as it is assumed, the intention to settle financially from the city of Banja Luka.

During 2017, Radoslav Šebić, through the Basic Court in Banja Luka, initiated civil proceedings against Đajić, with an early measure of noting in the cadastre and land registry that the said land cannot be traded until the end of the dispute between the two parties.

When the litigation procedure was opened in the District Court in Banja Luka, Đajić appeared at the preparatory hearing, accompanied by the lawyer Savić Rajna. He then accepted to participate in the proceedings. At the scheduled main trial on February 13, 2018, Đajić Bogosav sends a submission to the General Assembly in Banja Luka with a proposal not to participate in further proceedings due to mental disorders and for the court to deprive him of his legal capacity due to dementia. For that, he encloses a confirmation from the health institution of the Neurological Clinic in Banja Luka, where it was stated that he started the treatment in Banja Luka, and continued at the Institute for Cardiovascular Diseases in Dedinje in Belgrade. After that, the court determined that Đajic would no longer participate in the proceedings.

Regardless of the inscribed note as a burden in the land books of the Banja Luka regional unit, Đajic received a title deed through Grulović, in which the encumbrances on not real estate were deleted, and he gave the said list to notary Milenko Delić when drawing up a notary document on real estate. We note here that notary Delić was obliged to obtain the title deed himself, not older than eight days, and not to accept it brought from the party.

During the civil proceedings before the basic court, Šebić demanded the removal of Dejan Trivić from Jošavka (municipality of Čelinac, where the Đajić brothers are from), who was the acting judge in the first instance. However, Trivić continued to judge in that process, so he refused to accept all of Šebić’s evidence. The pre-agreement made between Bogosav Đajić and Radoslav Šebić is legally null and void, on the basis of which the court cannot present evidence and base the verdict, but after the expertise, a decision is made ordering Đajić to return 40,000 KM to Šebić. In the meantime, Đajić traded all real estate, so Šebić did not even manage to collect. To make matters worse, Šebić was ordered to pay all court costs!

Pursuant to the Law on Obligations, Judge Trivić was obliged to apply the provisions of that law and to double the amount that Šebić should have received according to the provisions of the down payment. The down payment itself is the basis for the calculation of the statutory default interest, which at that time was 17 per cent per year, as well as the penalty interest agreed in the pre-contract in the monthly amount of 3 per cent.

Due to all of the above, Šebić filed an appeal with the District Court in Banja Luka, which confirmed the verdict of Dejan Trivić and rejected all other allegations and evidence of Šebić. After the verdict became final, all accounts for Šebić were blocked in order to collect court costs.

In the meantime, Šebić submitted a request to the Supreme Court for revision of both verdicts, and deciding on his request, the Court then accepted the revision and passed a verdict which doubled the amount of 40,000 KM, and that verdict also took into account default interest. 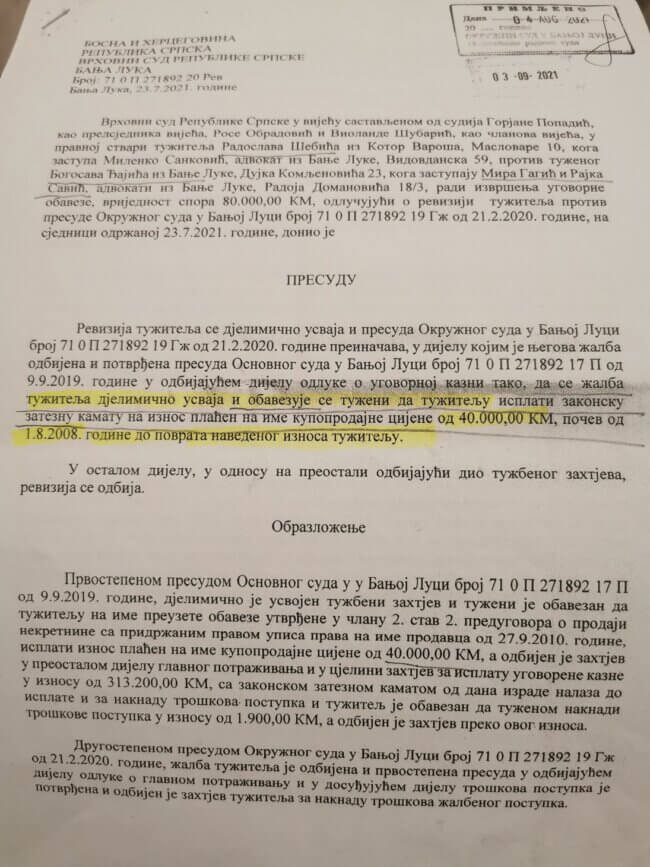 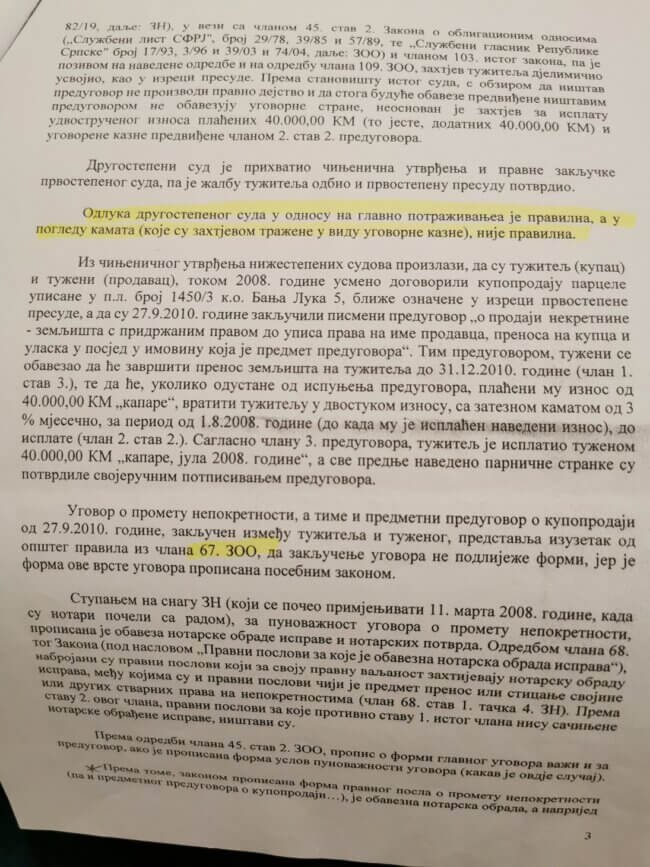 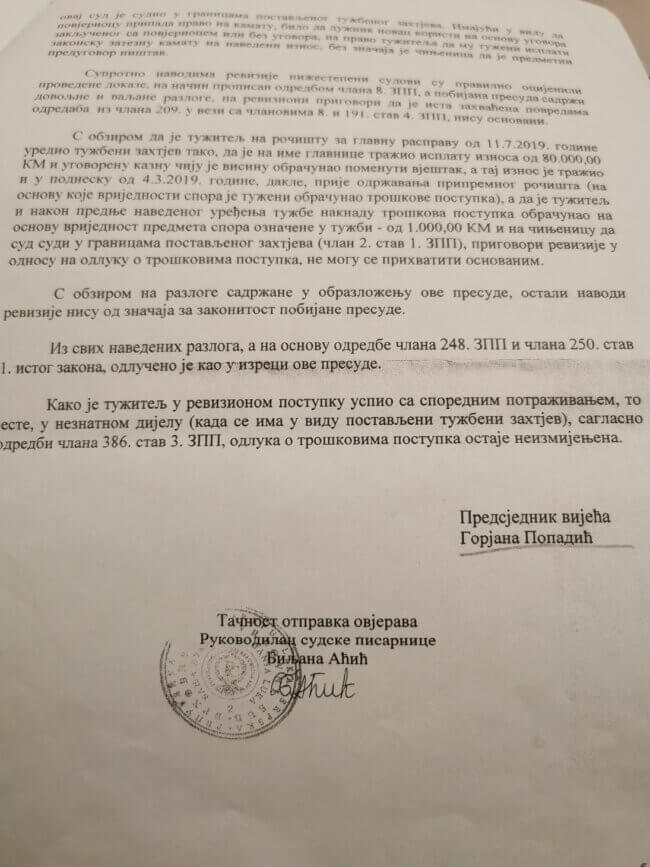 Revision of the judgment

During the waiting period, Šebić carried out certain checks and tried in a peaceful way to obtain compensation from Đajić by out-of-court settlement or to transfer the land he bought to him. Đajić refuses! After the last conversation in September 2021, Đajić Bogosav, according to Šebić, promised to pay Šebić money, and after that, he went to the Banja Luka Police Department and filed a report against Šebić for endangering security.

Due to the suspicion of illegal real estate transactions, Šebić also filed criminal charges against Đajić, an unidentified person employed at RUGIP, Branko Savić and Rajka Savić, but also notary Milenko Delić, who passed away in the meantime.

On the other hand, Đajić briefly states for our portal that it is not true that he ever sold the land to Šebić, and that he is ready to appear in front of the cameras and deny that.

“He has no evidence of the sale of the land except for that pre-agreement, here, if you find any evidence, tell me. I offered him 40,000 KM, and he did not accept it. Radoslav Šebić is my longtime friend and I hope it will stay that way. However, if I ever sold him the land – that is not true “, categorically stated Đajić.

Radoslav Šebić stated for Infoveza that this very pre-contract is the evidence that the court eventually accepted and ruled in his favour.

“I want nothing more than that the verdict is respected. It is true that Đajić offered me money, but why would I accept that money, when today the land I bought is worth at least 10-20 times more than then “, points out Šebić and adds that he fought for what belongs to him legally and that Đajić should first read the verdict, and then comment.

Although there is no concrete evidence, the public in Banja Luka speculates that Bogosava was assisted in his actions by his brother – Vlado Đajić. 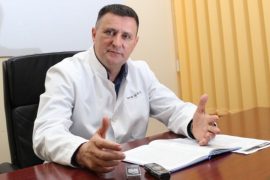