When you look at Ahmed, you see an adult man. He is 18. But what you don’t see is that this person has grown up on the road from Afghanistan to Bosnia and Herzegovina. He recalls that he left his country when he was only 10. It was his decision, and his parents did not interfere. He set off with his friends.

In Bosnia and Herzegovina, there are no records of the number of children and minors from Asia and Africa, who are trying to reach the European Union. In October 2021, there were 1.804 men, 166 women and 277 children staying in official refugee camps. If we consider those families living in abandoned buildings and improvised camps, the numbers are even higher.

“I have left Afghanistan because people don’t feel safe there. All of us who have taken this journey and are still on the road have been forced to leave the country. There is no other reason“, Ahmed is telling us while we are at the same time covering our eyes to protect them from smoke.

We are having this conversation sheltered by nylon stretched between four poles. Heavy rain is falling. Mud is everywhere around. Between us a couple of logs are lit for heat. We are trying to dry our wet clothes and warm our frozen fingers.

When he took this journey he could not have expected to be stuck in the mud of Velika Kladusa.

“It is very hard. I am someone who was left in ignorance. I don’t know what family is and what it means. To be part of a family. I would love to see my family again, but that’s not possible”, he briefly said.

His eyes are read. They are burning from smoke. But if he moves away he’ll freeze.

There are few families eating goulash with rice under another improvised nylon shelter. The meal was brought by the locals. They offer us some. We go to them, but just to warm ourselves. Children are putting their little fingers closer to the fire. We are talking to a man, but there is a girl staring at us. She wants us to record her statement. But only inside a tent, so that no one else could hear her.

We get in together. There are four of us. We crouch down in a tiny space, one behind the other, while she is explaining to us that six of them are sleeping in these 2 square metres. And one baby.

“My mom sleeps in a sitting position as there is not enough room. She just sits there, holding my sister in her arms“, the girl describes it.

She wants us to call her Marian. She comes from Afghanistan and is 18 years old. When she was just a baby, her parents left for Iran. A few months ago, they decided to try to reach Europe. She is the eldest of five children.

“We come here, having thousands of hopes and wishes. We have been forced to take this journey. Although we know what awaits us, we come here anyway. It is very difficult“, she describes everything, although we can see it ourselves.

Soon we spot tears on her face.  We get the feeling that we are the first ones to who she opens up.

She goes on to explain that her family belongs to the Khazars people, and that there are also the Pashtuns here in this improvised camp, with whom they are in conflict.  She’s  scared.

“I fear for my safety. It is quite dangerous to be a woman out there. We hoped that we would find human rights, women’s rights here (in BaH), but so far we’ve seen none of that. We don’t want to be perceived any longer only as girls living in poor conditions, we want this to stop. We want to be like other girls, we want to study, to achieve something“, she tells us.

She was educated for only a year. She wants to become a doctor. To show to other girls that it is possible. But at the moment, she is very unhappy.

“I wish I had never been born, I was born just to be miserable. I can’t sleep at all because of negative thoughts. Since we are constantly on the move, I have bad dreams all the time, like grabbing the bags in a hurry, the police catches us… I swear to God, it is only nightmares I have“, says Marian.

Muhamad (17) from Iran lives in the neighbouring town. He is staying in one of the family camps with his parents and his brother. Apart from getting good education, he also wants to become a professional football player. Children from these camps attend school. He is the first and the only one who goes to high school.

He has many traumas and believes they will never disappear. The first one is uncertainty as to whether he will ever be able to go back to his country.

“Will I ever see my home country again? The second one is that I’ve left my friends there, my family, everything I’ve ever known, and I’ve come to the unknown. The third thing might seem simple to you. Yet another kid that goes to school. Yes, my friends have accepted me, but I’ll always be a stranger and will always be different. It is a burden that I have to carry every day, it’s not easy at all“,  says Muhamad.

In the camp yard we meet Alisa (11). She left Afghanistan four years ago. She says that she’s not been dreaming since then. At least not bad dreams.

“While I was still in Afghanistan, I would weak up every night because of bad dreams, because life was unbearable there. That is why we had to leave. On this journey I see something good at the end of every dream. I never saw it there“, Alisa says.

She goes to school. Melisa (9) from Iran, who currently lives in an abandoned house near Velika Kladusa, does not have that possibility. She came here with her parents and brothers. There are few more families staying in that house. She should now be in the fourth grade of elementary school, but she didn’t spend a single day at school. She has been on the road for four years, and nowhere had she the opportunity to attend school.

She would like to become a doctor. In the meantime, bad dreams will continue to haunt her.

“When you sleep alone in the woods, you repeatedly hear some sounds and they are always there. I will never forget those sounds. It is because of the noise and the darkness that I constantly have bad dreams. Terrible dreams. I often dream that we are lost in the woods. It’s dark and everything is so scary. I wish to leave this country as soon as possible, I want to have a decent life“, says she.

Aware of only one aspect of the journey

Apart from the accommodation, children who are staying in the official camps in Bosnia and Herzegovina are also provided with some other services. Among others, psychological support to help them overcome certain trauma experienced by some of them. Those children, living outside these camps, in abandoned houses and in the woods, have none of it.

“What we have to have on mind is the fact that these children are on the move most of the time. It is very difficult to provide some sort of continuous and constant support, given that these children are moving very often. They change camps or areas. This is the biggest problem we face, to have continuity in our support“, says Almir Strkljevic from the Save the Children organization.

Those children who are travelling with their parents have no idea what’s happening around them. Their parents reveal only partial information, like the final destination.

“This means that children are aware of being on a certain journey, but the knowledge of details as to what is happening around them depends on their age, communication within the family, information sharing and the like“ explains Strkljevic.

Not all the children travel with their families. Some have set off with their friends, relatives, neighbours. They are the most vulnerable ones. Most often it is the oldest children in the family, who have been sent away to find a better life, but also to become able to help their families at a later stage. However, no one prepares them for what is to come.

“Those children don’t have information that they need to know at the moment when they leave. They get information mostly from people who are already on the road or from people they travel with. In most cases children are not aware of all the dangers that they will encounter or might encounter, given that the journey itself is not organised or planned in the manner that such dangers could be predicted“ says Strkljevic.

In the publication “Struggling to Survive“, published by the Save the Children organisation, it is stated that parents have a strong role in deciding about the departure, especially when it comes to children under 15. Those children often don’t want to leave, but cannot oppose their parents. Some children said that they would have never taken this journey had they known what was going to happen to them.

“Children have an ambivalent attitude towards the journey. Although they speak about difficult conditions, fears and dangers, they also say that they’ve felt very proud in situations when they’ve managed to take over the control, or have relied on their own strengths and abilities. This includes situations when they have made some money or have overcome an obstacle, such as surviving in the woods when the group would get away from the smugglers“, the study highlights.

Some of them get recruited by the smugglers during their journey, who often beat them and sexually exploit them. In order not to be taken to the camps and thus separated from the group, children often hide their true age. Staying in improvised camps or in abandoned buildings is very risky for them. There are hundreds of people living there, mainly men. It takes only one man to be aggressive to put a child in jeopardy.

“Children are aware that the violence is happening. The disadvantage is that there are no mechanisms for a child to report everything he experiences on that journey“, says Strkljevic.

When children travel independently they don’t have many things with them, nor money. They are often forced to work in textile factories or in agriculture in order to make some money to continue their journey.

“I always return to essentials: child is a child. No matter where he is, no matter where he was born…Children want to have a normal life, they want to play, to have friends, to have freedom most of all.  The absence of anything of the above will leave a mark on a child, and will cause deviation from normal childhood. I cannot say what kind of consequences this journey will leave on their childhood and later on their life. But from my experience, I surely know that any deviation from normal childhood leaves a mark in adulthood, not to mention childhood. Some children who are very young now might not feel this, but it will definitely reflect on those children of school age, children who are slowly maturing on this journey, with mark engraved for the rest of their life“, says Strkljevic,

Until they reach their desired destination and resolve their legal status, their childhood is on hold. Games, freedom, education. Everything is on hold. Postponed. Not known until when. Some children even grow up on their journey. They entirely lose a part of their life which should be the most carefree. Some even have the feeling that their childhood has been stolen.

The names of children and parents are changed for personal safety. We spoke with children with parental permission. 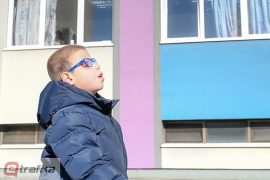 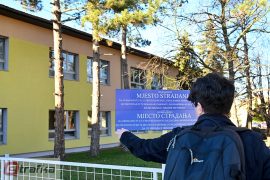